Over the past 28 years, the Hubble Space Telescope has inspired a generation of astronomers with insanely dramatic views of the universe, but it’s hardly done blowing our minds. NASA has unveiled a new fly-through video of the Lagoon Nebula. Located in the center of the Milky Way, NASA calls it a “raucous star nursery” full of dust and star formation with “Herschel 36,” a star 200,000 times larger than our sun, at its center.

The video starts wide, then zooms in to the center of the Lagoon Nebula, located around 4,000 light years from Earth. Herschel 36 is the most prominent star, emitting powerful radiation and stellar winds that push dust away in “curtain-like sheets,” NASA said. You can see dark, elephant trunk-shaped material that resists the erosion and serves as an incubator for new star formation.

NASA employed the Wide Field Camera 3, operating in the visible light range, to create the video. The fourth-generation instrument was only added to Hubble in 2009, and is the space telescope’s highest resolutioncamera by far. NASA can also flip on a near-infrared channel, which penetrates much of the dust and reveals an incredible number of stars embedded in the Nebula, as shown in the image below. 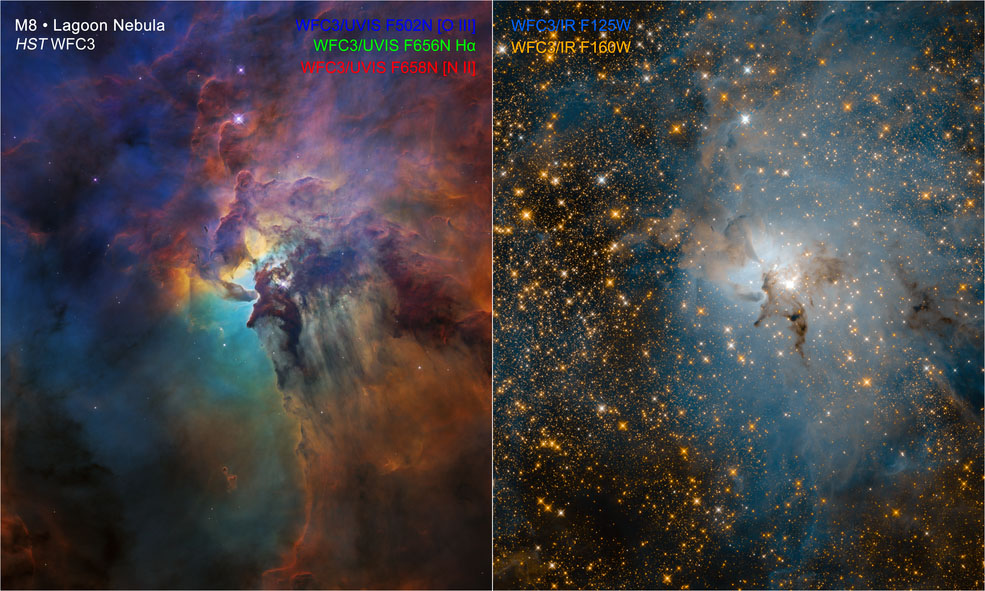 Though public outreach is actually a pretty big part of its mission, Hubble is good for a lot more than just making pretty pictures. It’s been a crucial instrument in exoplanet discovery, for instance, as it recently showed that the Trappist-1 planets may have water by scanning the starlight passing through their atmospheres.

It has also discovered new bodies within our own solar system, detected impact sites from the comet Shoemaker-Levy 9 on Jupiter and imaged “deep field” views revealing galaxies billions of light years away, including the farthest ever spotted, GN-z11. It also proved that black holes are common at the center of galaxies, rather than being rare as was thought.

Much like the Mars Opportunity rover, Hubble has already flown far, far, beyond its expected mission life, despite getting off to a very bad start with a flawed mirror. Its last servicing mission to install the aforementioned Wide Field Camera 3 was done in 2009 by the Space Shuttle Atlantis crew. Hubble will eventually be replaced by the James Webb Space Telescope(JWST), but NASA recently extended its mission life until at least 2021. Given the recent one-year launch delay for the JWST, it might need to go even longer than that.