Brazil sealed their quarter-final place at the 2018 FIFA World Cup on Monday as they dispatched Mexico 2-0 at the Samara Arena in Russia.

Neymar broke the deadlock six minutes into the second half when he finished off a fine team move—that he himself started—from close range.

Roberto Firmino added the second in an 88th-minute counter-attack when Guillermo Ochoa could only direct Neymar’s shot into his path.

During the group stage, Neymar was often guilty of trying to go it alone, reminiscent of the 2014 World Cup in which he represented the Selecao’s sole hope of winning the tournament.

He need not do that this time around as Brazil boasts a collection of strong options in the final third, and he was rewarded for showing faith in his team-mates with his goal.

After a goalless first half in which both teams tried to impose themselves on the contest, the game was delicately poised heading into the second period.

Dribbling with the ball on the edge of the area, Neymar elected to backheel the ball to Willian rather than fire into the crowd or attempt to draw a foul, and the Chelsea winger delivered it back to him in a dangerous area:

GOAL! A one-two made in Brazil. Neymar backheels to Willian who drives into the box before laying it on a plate for Neymar at the back post from close range pic.twitter.com/joILjQClU3

The Brazilian taps home a Willian cross to make it 1-0 early in the second half. pic.twitter.com/p7aDi34UhP

All about the movement on that goal. Neymar could have just stood and admired his pass to Willian, but instead he spins away, keeps moving, anticipating where the ball will be next and is able to gain a yard to finish. Textbook forward work. #BRA #MEX #WorldCup pic.twitter.com/q96L2ebyxs

Philippe Coutinho’s goal against Switzerland was a fantastic strike from distance, but this was Brazil’s best moment of the World Cup so far, and it was borne out of Neymar’s trust in his team-mates to keep the move going and return it to him at the right time.

The 26-year-old showed during his time with Barcelona that he can be part of a cohesive attacking unit.

While he was still able to showcase his individual skills at the Camp Nou, he had excellent chemistry with Lionel Messi and Luis Suarez, and the trio dovetailed well together because they played to each other’s strengths and shared responsibility between them.

Neymar can lead Brazil to glory here in Russia, but to maximise the Selecao’s chances he needs to link up with his team-mates in that fashion. If he does, we should see more of the slick attacking play we expect from Brazil along the way.

Fagner Is a Weak Link for Brazil

It was clear Dani Alves would be missed by Brazil from the moment a knee injury in May ruled him out of the tournament.

The Paris Saint-Germain right-back is known more for his attacking contributions—courtesy of his strong delivery and overlapping runs—than his defensive capabilities, but his replacement Fagner has done little to inspire confidence. 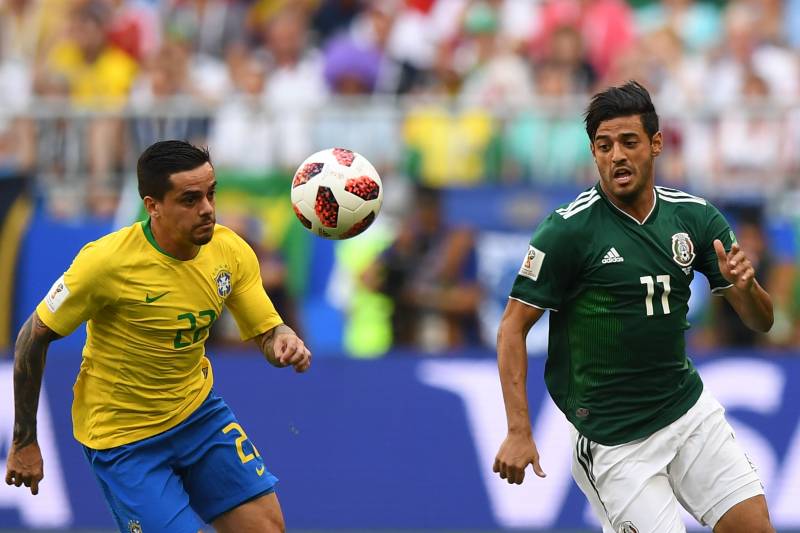 Brazil boss Tite has gone with the Corinthians full-back in their last three games after selecting Danilo for their opener, and Fagner looked particularly shaky here.

In the first half especially, Mexico repeatedly had joy down their left flank against Fagner with Carlos Vela, Andres Guardado and Javier Hernandez all causing him problems at various points, as The Independent’s Miguel Delaney noted:

Fagner is being targeted and struggling.

ITV Football offered a further demonstration of Vela’s ability to offer a threat from that side:

The 29-year-old failed to cope with players running at him and left plenty of space in behind for El Tri to exploit.

If they face Belgium in the next round, the likes of Eden Hazard could give him a torrid time.

Mexico were ultimately outclassed by a superior side, but they played well and caused Brazil plenty of problems in the first half.

What ultimately proved to be their downfall was their lack of a ruthless streak in the final third.

Football writer Cesar Hernandez noted their need to take advantage of the opportunities they created early on:

Good first 15 minutes from Mexico. Just need to capitalize on those chances in the final third. #ElTriEng #Mex

They showed plenty of attacking intent—leaving three players up to offer a counter-attacking threat from corners and getting in behind their defence with some direct running—but they lacked quality in their final ball and were not clinical enough in front of goal.

Hector Herrera demonstrated as much when Vela picked him out on the edge of the area, but having elected not to shoot first time, his shot was smothered after he tried to cut onto his left foot.

On more than one occasion, they were too eager to shoot when there were team-mates unmarked in better positions. Yahoo Sports’ Henry Bushnell summarised their showing:

Mexico settling for/being forced into low-percentage shots was one of the stories of that game. Once again, just didn’t quite have the quality in the final third https://t.co/iBIviEa2Uw

El Tri provided one of the biggest shocks of the tournament when they beat Germany 1-0 in their opening game, but in truth their problem was already visible even then, as they should have beaten Die Mannschaft by a much larger scoreline than they did given the chances they created.

Vela and Hernandez are 29 and 30, respectively, so it’s unlikely they’ll be key players for Mexico come the next World Cup if they’re still playing. Hirving Lozano is just 22, though, and should be in his prime by then and even more important to their attacking play.

If they’re to avoid going out of their eighth consecutive World Cup in the round of 16, they’ll need to be more ruthless next time around.