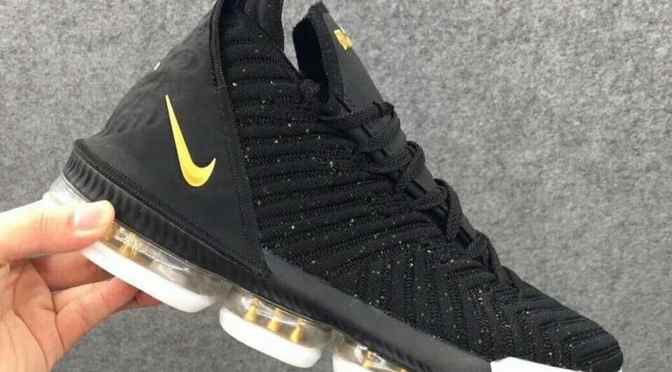 Along with the Los Angeles Lakers officially unveiling their new Icon jerseys (inspired by the Showtime era) on Tuesday, there is more news for purple and gold’s faithful. An image has surfaced of a sample of the Nike LeBron 16—the first signature that LeBron James is slated to wear with his new team.

The pair maintains some of the key features from the LeBron 15with a new Battleknit pattern used across the upper and a visible Zoom Air unit that appears to be identical. Unlike the one-piece upper of last year’s model, this pair looks like it will have a more traditional tongue.

Another notable detail is the heel overlay, which is debossed with the lion face logo that has been largely absent from the superstar’s footwear since being seen on the tongue of the LeBron 8—ironically his first signature as after packing his bags and leaving Cleveland for South Beach back in 2010.

This sample is outfitted with a black upper and yellow branding hits on the lateral Swoosh and “LJ” crown logo on the tongue.

An official release date for the LeBron 16 has yet to be announced.