Magic Leap’s long-awaited augmented reality headset finally debuted over a month ago, even if its $2,300 price tag makes it much too extravagant for most of us. Still, it’s a pretty big step forward for consumer-grade AR, and the company is betting big on developers to create the content library it needs. One such developer is Rovio, which announced it’s bringing its most popular game franchise — Angry Birds — to the platform.

Angry Birds FPS: First Person Slingshot was designed in collaboration with Resolution Games to play well in augmented reality. Instead of swiping from left to right to fling your birds on a touchscreen, you’ll be holding the slingshot in your hand and shooting your avian friends in a three-dimensional environment from a first-person perspective, set in the real world.

I had the chance to try this out at a brief demo in a San Francisco hotel suite. Rovio’s developers already had the game set up, where the pigs and their structures were positioned in the center of a coffee table in the room. I wore the Magic Leap headset — there’s no support for glasses yet, unfortunately — with the accompanying Lightpack (which houses all of the computing power) in my pocket and the wand controller in my hand. As my colleague Devindra Hardawar has already commented, the AR environment on the Magic Leap is surprisingly sharp, and though the field-of-view could be bigger, it’s far taller and wider than that of HoloLens.

In my demo, the game was set up on a table, but Sami Ronkainen, Rovio’s creative director, explained you could also have it set up on the floor. Having it set up on a table is a bit more fun, however, because as the birds fly off and the buildings crumble, the bricks and debris tumble off the table on to the ground below. Tommy Palm, CEO and founder of Resolution Games, said you could even set the stage to bounce the bird off a wall or a chair to increase your chances at making the shot.

The graphics were consistently colorful and crisp, and I liked that I could go up close to a pig, for example, and it wouldn’t get blurry or pixelated at all. In fact, as I got nearer, the pig actually looked up at me and made a gesture and a face, as if to taunt me. The birds also cheered me on excitedly if I made a good shot. 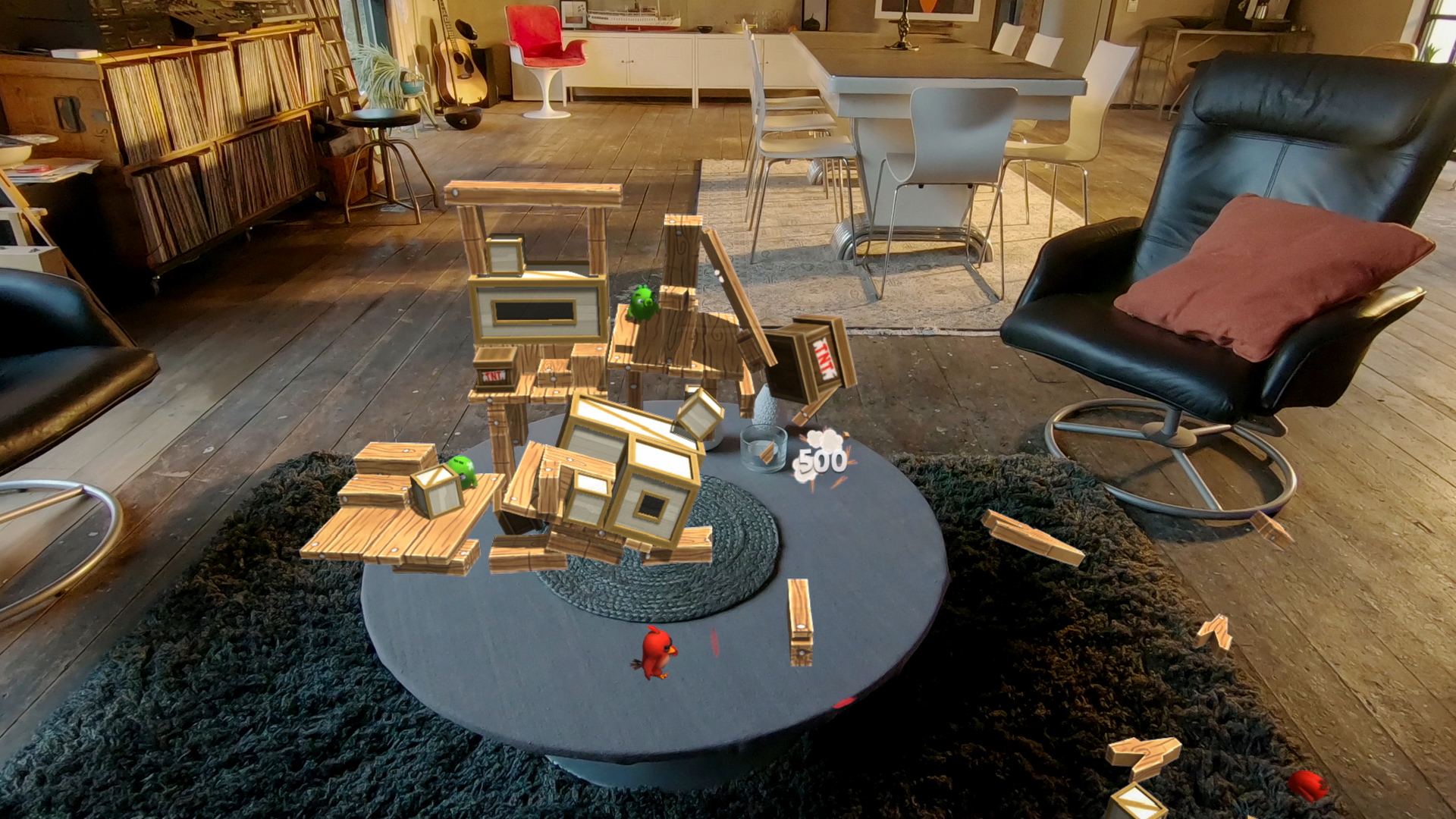 The way you play the game is pretty simple. Squeezing the trigger will make the slingshot freeze in the air with the bird in position. Stretch back to plan your trajectory, then release it to fling the bird. If you have one of the special power birds (yellow speeds up and blue splits into multiple attacks), you just press the trigger again to unleash their ability. The further away you fling your birds, the bigger the multiplier effect on your score.

Since this takes place in augmented reality, there are a few additional tricks that make this different from a normal Angry Birds game. For one thing, I could actually walk around the structure to see if I could spot a weak point or get a better shot. The birds followed me around the table as well. It all seemed so remarkably lifelike that I actually forgot for a second that my controller was out of my field-of-view, and I was wondering where my slingshot went (it reappeared as soon as I held the controller in front of my face).

Ronkainen tells me that the team tried to hide hints in each level. The developers placed hidden TNT boxes (which explode if you hit them) that are viewable only from certain spots. Some blocks are built like dominoes, so if you knock one over, it’ll knock over another. But you’ll only find these hints if you take the time to examine the structure from all angles. 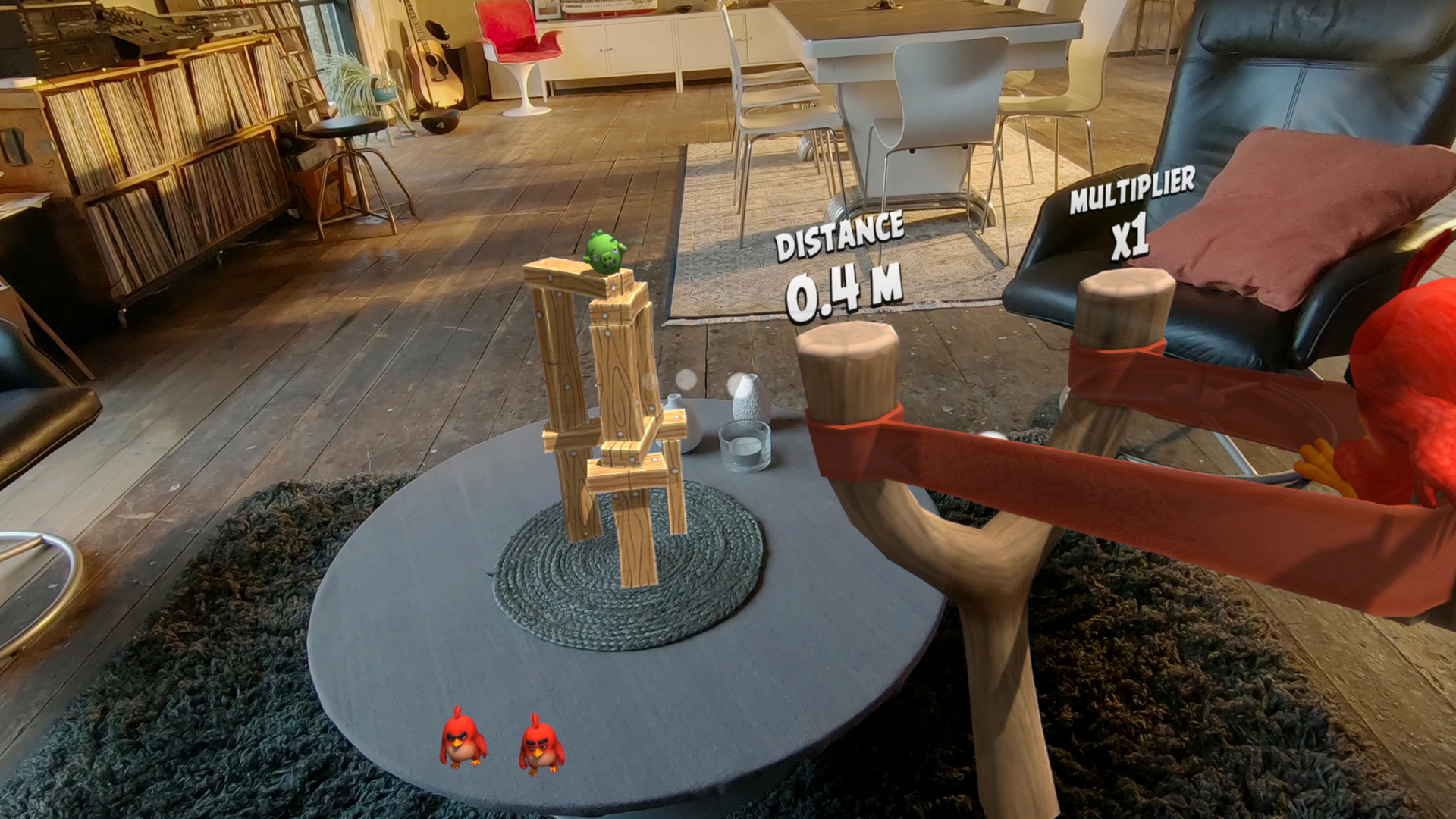 Though I liked the game overall, I wished the other people in the room could see the same things I could, instead of wondering what I was laughing about. After all, one of the benefits of AR on physical devices is that you can still interact with your friends in the real world, and that interaction is lost if they can’t see what you’re seeing. Palm agrees, adding that he thinks the ideal situation would be to increase the social aspect so we could see the same things together. That would be pretty difficult to do without at least two (expensive) Magic Leap devices lying around.

Rovio and Resolution Games started developing the game for Magic Leap in January, and the process has been a learning experience. “We can’t really know the environment this is going to be played in,” said Palm, adding that there’s no way he can predict what your living room or house looks like. “You can’t know for sure that it’s going to map everything perfectly.” The team also encountered a few limitations. For one thing, the game has to be set in an area at least one meter wide, and it can’t be placed on a shiny, glossy surface like a glass table. It can’t quite map smaller objects like a cup, either. “It’s not that precise,” said Palm. 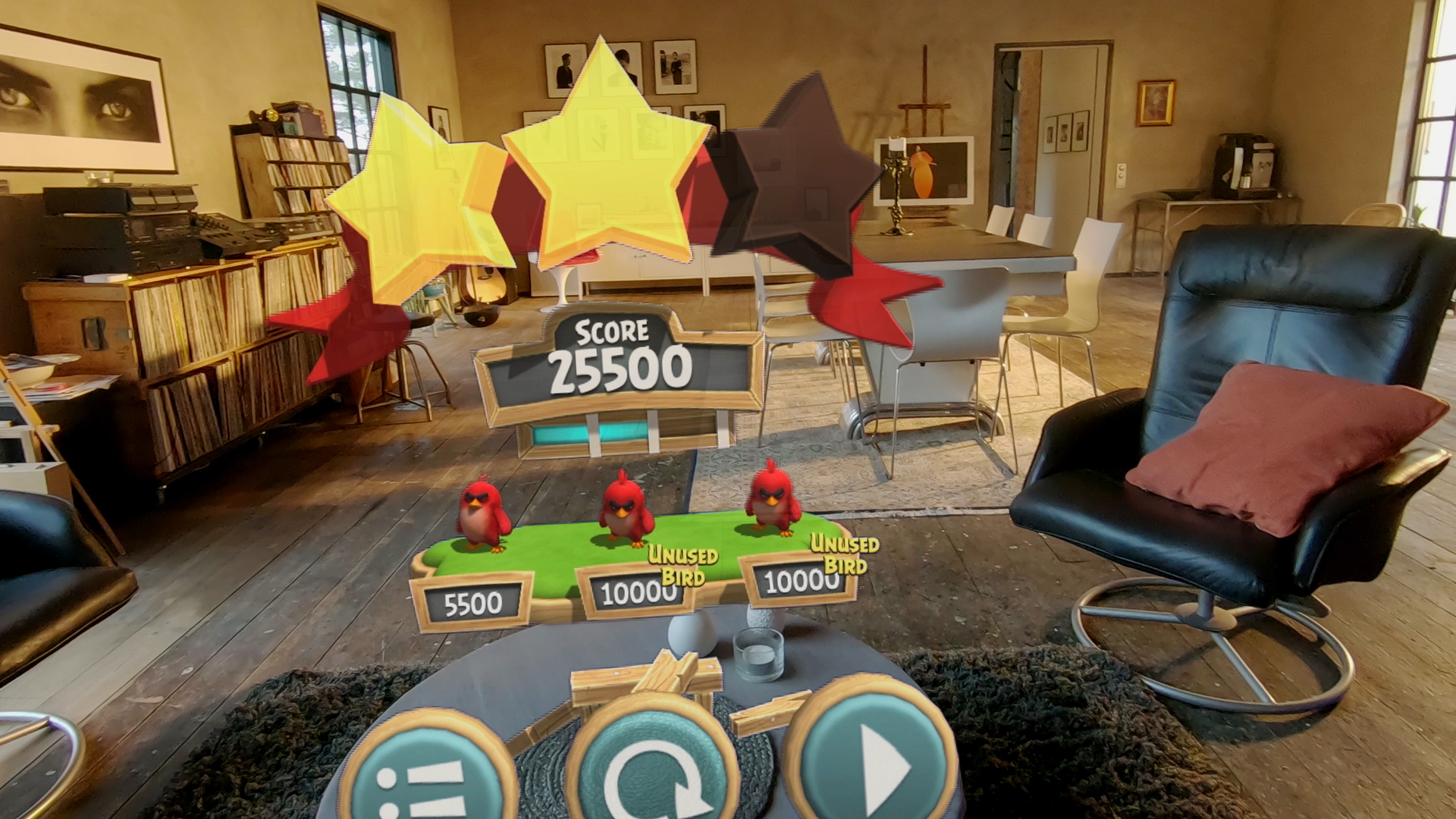 As for why Rovio wanted to develop Angry Birds for Magic Leap, the company apparently just wanted to be part of the movement. “The original Angry Birds came out in 2009,” said Ville Heijari, Rovio’s chief marketing officer. “The smartphone market emerged and launched this mobile games market, and we were a part of that.”

So when it came to augmented reality and Magic Leap, Rovio saw an opportunity to get in early at yet another apparently burgeoning market. Rovio and Resolution Games will launch the game officially at Magic Leap’s first developer conference, where even more AR titles and experiences will likely make their debut. “We try to look at the broader landscape, which seems to be extended reality, be it VR or AR,” said Heijari. “This will likely be the future of mobile computing. We just want to be there, in the first wave.”