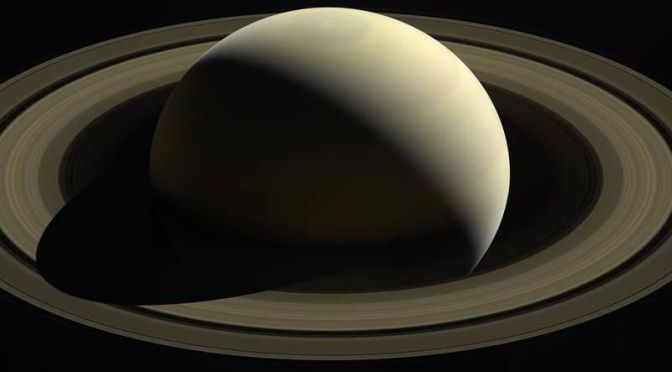 The Cassini space probe’s fatal plummet into Saturn has revealed that the gas giant’s innermost ring sheds icy showers of rain and organic molecules into the planet’s upper atmosphere at an incredible rate.

Cassini finished a 13-year stint exploring Saturn and its moons just more than a year ago, but many scientific findings related to the dramatic exit are still being revealed. The probe swung through the gap between the giant planet and its famous rings 22 times, collecting as much data as possible before plunging into the planet’s atmosphere and burning up.

For years, researchers have known about Saturn’s “ring rain,” or the fact that the ring system around the planet delivers water to the upper atmosphere. But during its final swings around Saturn, Cassini’s gadgets measured the constant shower of nanosized particles. The rain is mostly composed of molecular hydrogen, but also contain lots of icy water as well as carbon compounds, like butane and propane, reports Elizabeth Howell at Seeker.

The sheer volume of material was one of the biggest surprises; Cassini measured 22,000 pounds of material per second fall from the rings. Most of the chemical slurry is being purged from the ring closest to Saturn’s atmosphere, the D-ring. At the current pace, the ring could be fully depleted in about 100,000 years.

“Turns out, ring rain is more like a ring downpour,” says planetary scientist Hunter Waite of the Southwest Research Institute and lead author of the study in Science. “While [the ion and neutral mass spectrometer] was designed to investigate gases, we were able to measure the ring particles because they hit the spacecraft at such high velocities they vaporized. Water ice, along with the newly discovered organic compounds, is falling out of the rings way faster than anyone thought—as much as 10,000 kilograms of material per second.”

The finding changes what we know about Saturn’s rings and its atmosphere. Co-author Kelly Miller, also a planetary scientist at the Southwest Research Institute, tells Howell at Seeker that the massive amount of ring rains suggests that Saturn’s D-rings are being fed material from Saturn’s larger C-rings, a new discovery. The data also suggests that there is lots of material in the D-ring that is too small to be picked-up by remote sensors, meaning directly sampling it like Cassini has done is the only way to detect it.

In fact, another recent study using Cassini data indicates that Saturn’s rings are only about between 150 and 300 million years old, and may not last forever, especially if they are constantly losing material to the planet below. But not everyone agrees with that interpretation and the age of the rings is still debatable.

“Are we just lucky enough to be in the period of time when Saturn has these magnificent rings?” Sean Hsu of the University of Colorado Boulder asks Nadia Drake at National Geographic. “It’s also fascinating to think that if a massive ring could form recently, that has implications for the other icy moons of Saturn.”

All that dust entering Saturn’s upper atmosphere also has major effects on its ionosphere, perhaps heating it up or changing its atmosphere.

“This gunk coming in chews up a lot of the ionosphere, affects its composition and causes observable effects—that’s what we’re trying to understand now,” co-author Thomas Cravens of the University of Kansas says in a press release. “The data are clear, but explanations are still being modeled and that will take a while.”

This wasn’t the only finding from Cassini’s Grand Finale released recently. Several other papers based on the data also published in Science reveal a new electric current system connecting the rings and upper atmosphere and a newly discovered radiation belt around the planet. Another study shows that Saturn’s magnetic field is nearly aligned with its spin axis, unlike any other planet studied. Astronomers were also able to collect radio transmissions from the planet’s poles. It’s expected that the Grand Finale data will reveal even more of Saturn’s secrets.

“Many mysteries remain, as we put together pieces of the puzzle,” says Linda Spilker, Cassini Project Scientist at the Jet Propulsion Laboratory in Pasadena. “Results from Cassini’s final orbits turned out to be more interesting than we could have imagined.”