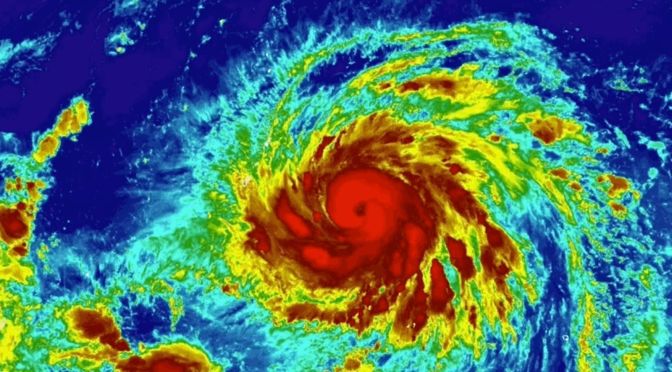 It feels like 2018 is the year of rapid intensification. Storm after storm after storm has spun up from humble begins to cyclonic monster around the world. The latest cyclone to join the ignominious club is Typhoon Yutu which is in the midst of spinning up into a forecast Category 5 super typhoon by Wednesday. Guam and the Northern Mariana Islands lie squarely in the typhoon’s path.

Yutu spent all of Tuesday ramping up and as of the latest Joint Typhoon Warning Center bulletin, it had estimated winds of 127 mph. That’s the equivalent of a very strong Category 3 storm, and with nothing but warm water in its path, Yutu is expected to continuing amping up. The storm’s winds could be roaring around 155 mph as it approaches Guam and the Northern Mariana Islands on Thursday morning local time.

The National Weather Service Guam office has posted a typhoon warning calling for powerful surf and up to half a foot of rain. The hilly terrain of Guam will be but a speed bump for Yutu, which is forecast to keep climbing in intensity through the end of the week. Its winds could reach an astounding 172 mph, which would put it among the strongest storm on Earth this year. Thankfully, it will achieve that terrifying feat over open water with no threat to land.

Some weather experts have been watching the storm via satellite and wondering if the official forecast is a bit underdone and if Yutu could be more intense than current estimates. That’s because there’s a subjective element involved. Satellites don’t measure storm’s wind speeds directly, but provide a snapshot of convection and the processes that indicate how healthy a storm is.

Meteorologists use that data to estimate wind speeds using something called the Dvorak technique. Without getting into a bunch of equations, suffice to say forecasters use what the satellite imagery reveals about convection, temperatures within the storm, and a few other factors to come up with a “T number,” which can be translated into an estimated wind speed.

The technique is super useful for remote parts of the Pacific that don’t have the benefit of estimates from aircraft like the National Oceanic Atmospheric Administration’s Hurricane Hunters. And Chris Velden, a hurricane expert at the Cooperative Institute for Meteorological Satellite Studies (CIMSS), told Earther that using the technique “gets the mean state right most of the time, but it can break down when you have anomalous conditions like a very rapidly intensifying storm or decaying storm.”

Yutu is one of those storms, and while Velden said he felt the current official forecast was pretty spot-on, that doesn’t mean the storm won’t continue to push the limits of what’s possible.

“This has potential to grow into a Category 5 real quickly,” he said. “People at the Joint Typhoon Warning Center are watching this. They know what they’re doing.”