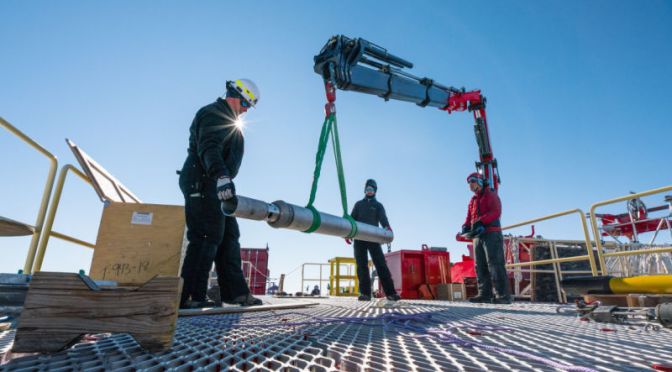 While you were baking cookies and binging Netflix shows over Christmas, a team of about 50 scientists, drillers, and support staff was attempting to punch through nearly 4,000 feet of ice to access an Antarctic subglacial lake for just the second time in human history. And folks, they did it.

On Friday, the Subglacial Antarctic Lakes Scientific Access (SALSA) team announced they’d reached Lake Mercer after melting their way through an enormous frozen river with a high-pressure, hot-water drill. The multi-year effort to tap into the subglacial lake—one of approximately 400 scientists have detected across Antarctica—offers a rare opportunity to study the biology and chemistry of the most isolated ecosystems on Earth.

The only other subglacial lake humans have drilled into—nearby Lake Whillans, sampled in 2013—demonstrated that these extreme environments can play host to diverse microbial life. Naturally, scientists are stoked to see what they’ll find lurking in Lake Mercer’s icy waters.

“We don’t know what we’ll find,” John Priscu, a biogeochemist at Montana State University and chief scientist for SALSA, told Earther via satellite phone from the SALSA drill camp on the Whillans Ice Plain. “We’re just learning, it’s only the second time that this has been done.”

Priscu, along with two other members of the SALSA science team, three drillers, and two marine technicians, flew into the camp located 650 miles from McMurdo station on December 18. The rest of the science team arrived the following day with 8,000 pounds of cargo in tow—some of the final supplies the team required after ice tractors pulled out a million pounds of drilling equipment, makeshift laboratories, and camp structures last December.

According to the latest SALSA blog post, the team began drilling its main borehole on the evening of December 23. (A secondary borehole that acts as a well, its water back-pumped into the main hole after being filtered and sterilized, was started a night earlier, Priscu told Earther.) Things apparently proceeded smoothly, with the team reaching the 54-square-mile lake on the evening of December 26 after drilling to a depth of 3,556 feet (1,084 meters).

Now that the lake is open, the real fun has begun. The SALSA team is deploying a suite of instruments to study the lake, including a CTD (Conductivity, Temperature, Depth) probe that will assess temperature and provide details on the structure of the water column, and a remotely operated vehicle to take similar measurements away from the borehole and capture 4k video. Researchers will collect samples of water and microbial DNA, as well as ice from the top of the lake and sediment from the bottom.

While much of the initial analysis of these samples will be done on-site, the samples and data collected through this endeavor will likely keep scientists busy for years to come.

In addition to possibly discovering life forms that haven’t seen the Sun in centuries, subglacial Lake Mercer offers an opportunity to better understand the local hydrology, including how lakes like this one affect the flow of the massive ice streams they’re buried beneath. Studying subglacial Lake Mercer’s sediments could also help determine whether it, like Lake Whillans located closer to the sea, was once a marine environment, thus filling an important gap in our understanding of Antarctic history, Priscu said.

For Siegfried, who leads a four-person geophysics team that’s spent the last 5+ weeks in the region servicing a long-term GPS array and installing electromagnetic instruments to map subglacial water, being at the SALSA camp has been “extraordinary.” The team arrived last week just as the drillers were pulling their hose out of the borehole after breaking through to the lake, Siegfried wrote Earther via satellite internet. Having spent over a month camping out alone on the ice, it’s felt like being in a giant city.

“We’re knee-deep right [now] sampling the deepest standing water body humans have ever accessed beneath Antarctica,” Siegfried wrote. “[S]o it’ll take some time to process what the ‘most’ exciting part [is].”