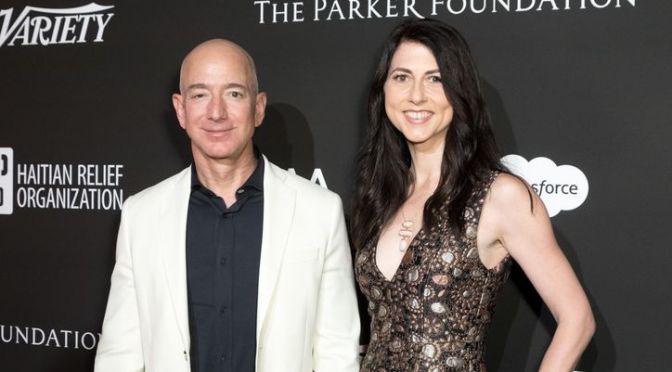 Jeff Bezos‘ divorce announcement this month has been a boon for the gossip pages, with tabloids dishing on the couple’s massive fortune of roughly $140 billion and on Bezos’ reported steamy texts to his new girlfriend.

But beyond the world of TMZ and Page Six, Jeff and MacKenzie Bezos’ divorce could have a big impact on Amazon’s ownership and create new challenges for the company. And though it’s unlikely, that turbulence could even harm consumers by slowing Amazon’s rapid pace of growth and innovation.

Additionally, the divorce is expected to result in one of the most notable settlements in history, and likely the biggest, since Bezos is the world’s richest person and runs one of the world’s most valuable companies.

Here’s what you need to know about the divorce and what effects it may have.

Jeff and MacKenzie Bezos jointly announced their divorce via Twitter on Jan. 9, saying they decided to split “after a long period of loving exploration and trial separation.” The message says they plan to remain friends. The couple married 25 years ago, the year before Bezos founded Amazon.

Jeff Bezos is Amazon’s founder, CEO, chairman and top shareholder. MacKenzie Bezos is a novelist who helped Amazon grow during its early years but hasn’t been significantly involved in the company since and has a much lower profile than her husband. The couple has four children.

Hours after the divorce announcement, the National Enquirer reported that Bezos has been dating Lauren Sanchez, the wife of WME talent agent Patrick Whitesell. It also published a series of texts Bezos allegedly sent Sanchez, including: “I love you, alive girl. I will show you with my body, and my lips and my eyes, very soon.”

Sanchez, an actress and helicopter pilot, didn’t respond to a request for comment sent to her aerial filming company Black Ops Aviation.

Nearly all of Bezos’ wealth comes from his 16 percent ownership in Amazon, a company valued at about $800 billion. Bezos personally owns The Washington Post, which he purchased for $250 million in 2013. The couple’s properties include two homes in Beverly Hills; two homes in Medina, Washington; the largest home in Washington, DC; and a Texas ranch, according to The Wall Street Journal.

Bezos also owns Blue Origin, a rocket and space travel company he founded in 2000. He invests about $1 billion of his Amazon stock every year in developing the startup. Through Bezos Expeditions, he owns stakes in companies including Airbnb, Uber, Nextdoor and Twitter.

After being a minor player in the charity world for most of his career, Bezos in September unveiled the Day One charitable fund, with an initial investment of $2 billion to aid nonprofits focused on homelessness and to create a new network of preschools in low-income communities.

What could happen next for Amazon?

At this early point, it’s hard to say what may change for Amazon’s ownership. TMZ reported that there’s no prenuptial agreement, which means the world’s biggest individual fortune may be split in half and Bezos may lose direct control of half his Amazon stake. That could result in MacKenzie pushing for changes at the company or requesting a seat on Amazon’s board, but either scenario is speculative since it’s still unclear how the divorce will shake out.

Though the ownership questions remain up in the air, corporate governance experts say the divorce is sure to add uncertainty for Amazon. It may also create a distraction for Bezos, much like if a CEO was dealing with a death in the family or a medical issue.

“These are hard jobs even in the best of circumstances, then you add other things in there,” said David Larcker, director of the Corporate Governance Research Initiative at Stanford’s business school. “Do you have the bandwidth to deal with it? Do you have your eye on the ball?”

Jill Fisch, a professor of business law at the University of Pennsylvania, said: “How strong Amazon is as a company will determine how big an impact this has.”

Larcker and Fisch likened the Bezos divorce to Tesla CEO Elon Musk’semotional issues last year and Apple co-founder Steve Jobs‘ illness and death in 2011. In both cases, the impact on consumers and the products they buy from Tesla and Apple was muted. Larcker said he expects the same outcome in Amazon’s case, too, though he cautioned that a more distracted Bezos could harm long-term decisions and cause Amazon to miss out on potential acquisitions.

To avoid those kinds of issues, Larcker said, Amazon will have to rely on its bench strength of longtime Amazon executives, who include worldwide consumer business CEO Jeff Wilke, Amazon Web Services CEO Andy Jassy and senior vice president Jeffrey Blackburn. Amazon now employs 613,300 people worldwide, meaning it’s not run by any one person, no matter how important, and can continue to move on it own momentum at least for the short term, he added.

Has there been any impact on Amazon so far?

There have been scores of tabloid headlines, and the publishing of embarrassing texts allegedly from Bezos punctures Amazon’s typical air of secrecy. Beyond that, there’s been no clear dustup related to Amazon as a company, with its stock remaining stable since the divorce announcement.

Even with half his fortune, Bezos is likely to remain just as engaged in and motivated about Amazon’s growth, since his identity is so closely intertwined with the company, and he’d still be worth a staggering $70 billion, Larcker said.

Even so, there’s no lack of challenges for Bezos. He’s just starting the development of two new major 25,000-employee offices, in New York City and in Alexandria, Virginia. His company is stretching itself into smart-home gadgets like the popular Alexa-powered Echo speakers, as well as Hollywood, health care, groceries, robotics and new international markets. Plus, competition in Amazon’s main business, online retail, continues to simmer as Walmart, Target and other traditional retailers fight to catch up.

There’s not a lot of room for error for Bezos and Amazon. If this team stops executing as well as it has for the past few years, lots of competitors could jump ahead.

Has a similar CEO divorce happened before?

Yes, though the numbers don’t get any bigger.

Wynn Resorts founders Steve and Elaine Wynn divorced in 2010 and split their 18 percent stake in the casino company, which was then valued at about $1.5 billion. The breakup was amicable, but things fell apart soon after, with Elaine Wynn suing to regain voting control of her shares and eventually becoming the largest shareholder when Steve Wynn resigned amid sexual misconduct allegations.

Rupert and Anna Murdoch’s marriage of 32 years ended in 1999, resulting in Anna reportedly receiving $1.7 billion in the settlement.

There are plenty of other instances of super rich divorce settlements, too, but the Bezos split is expected to result in the biggest settlement in history, with MacKenzie Bezos becoming the wealthiest woman in the world.

Yes, even Donald Trump has a take on this divorce. Trump has often showed his disdain for Jeff Bezos, mostly because Bezos’ Washington Post has reported many unflattering things about the commander-in-chief.

So sorry to hear the news about Jeff Bozo being taken down by a competitor whose reporting, I understand, is far more accurate than the reporting in his lobbyist newspaper, the Amazon Washington Post. Hopefully the paper will soon be placed in better & more responsible hands!

The president is known for taking digs at his enemies, so it should come as no surprise that he’s mocked Bezos amid the divorce. In one tweet earlier this month, Trump called him “Jeff Bozo.” When asked about the Bezos divorce, Trump, who’s been divorced twice, said: “I wish him luck. It’s going to be a beauty.”

Trump also enjoyed a victory lap after the National Enquirer broke news of Bezos’ extramarital relationship. The president is close to the tabloid’s publisher and has reportedly used the publication to suppress allegations of his own affairs.

Bezos and Amazon routinely avoid responding to Trump’s taunts. Onlookers should expect that posture to continue.