To get anywhere interesting in the discussion about James Harden‘s place in NBA history, you have to accept the idea that “best” isn’t a fixed descriptor. It’s a mantle that changes hands all the time as the game advances.

If your reaction to the idea of Harden being the best offensive player ever is to immediately dismiss it without thought, this isn’t for you.

Chances are, you also missed him scoring a career-high 61 points against the New York Knicks in Houston’s 114-110 victory Wednesday night, extending an offensive run the likes of which we’ve never seen.

So if you’re intrigued by the thought that Harden might be unprecedentedly good, and if you’re flexible in your thinking, and if you’re not hung up on Wilt Chamberlain’s cartoon stats or Michael Jordan’s mystique or the cult of Kobe Bryant hero worship, you can appreciate the validity of the question.

You can also get along with Houston Rockets general manager Daryl Morey, who told ESPN’s Tim MacMahon:

“You could argue for him as the best offensive player of all time. To be able to say that with a straight face, and not have it be GM speak or coachspeak, is pretty amazing. There’s a whole bunch of ways to measure it, but he’s for sure in the conversation as the greatest offensive player ever.”

And Chris Paul, who, over a month ago, espoused the same feeling to reporters: “He’s the best offensive player I’ve ever seen.”

Morey and Paul may be biased, but they don’t really gain anything from offering these opinions carelessly—unless, for some reason, both believed the league’s leading scorer needed a confidence boost.

Both offered context for their assessments, and that’s vital to any worthwhile discussion. Morey said you “could argue” and that Harden was “in the conversation.” Paul qualified his comments with “I’ve ever seen,” which narrows the parameters.

That’s how we have to approach this, too, because Harden falls woefully short of many great offensive players if we weigh his achievements against theirs. He doesn’t have 38,388 career points, which would put him ahead of Kareem Abdul-Jabbar, for example, and there are 14 active players with more career points than Harden has.

If longevity matters, there’s no case for Harden here.

What Morey and Paul were getting at, and what we can focus on to give Harden a fair shake, is a smaller window. Really, Morey and Paul are saying nobody’s been better offensively than Harden is right now.

That might seem like a lowering of the stakes, but it’s still meaningful to say Harden is establishing a new peak for offensive play right before our eyes. Even Harden himself acknowledges the “all-time” talk is premature.

“Obviously, I got a long way to go, but this is a pretty cool beginning,” he told reporters after scoring at least 30 points in his 20th consecutive game on Monday.

That streak works as well as any stat to get us into the meat of the Harden question.

Chamberlain is the only player besides Harden to string together that many 30-point games. So at the very least, we can say Harden has played historically well on offense (if you’re measuring that by points scored, which seems reasonable) over the last several weeks.

Including his 61-pointer in New York, Harden scored 204 points in a four-game span, becoming the first player since Bryant (2006-07) to do so. Let’s compare: 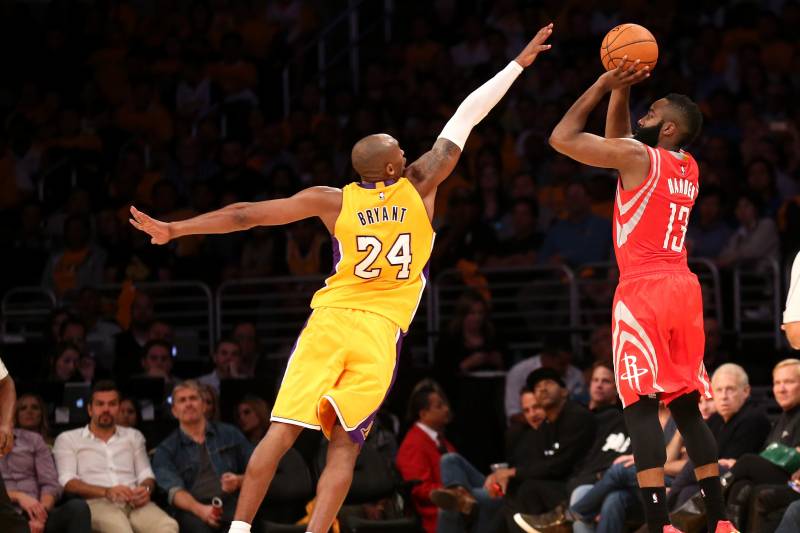 Bryant scored 225 points in his four-game run, averaging 46.6 minutes per game with a 67.6 true shooting percentage, a 41.4 percent usage rate and a 12.1 percent assist rate.

Harden’s four games included 204 points in 39.5 minutes per game. His true shooting percentage was 64.1 percent, his usage was 44.6 percent, and his assist rate was 28.4 percent.

Offense isn’t just individual scoring, though. It should also (at least) include points generated for others. Bryant registered 11 assists that led to 24 additional points during his blitz. Harden created an extra 40 points with his assists, running the tally of total points created to 244, just five fewer than Bryant’s 249.

There is no reel of Bryant passing like this:

It’s also worth noting that Harden produced his 245 points in 158 minutes of court time, while Bryant ran up his total in just over 186 minutes.

The difference between those two streaks, and the one that should give Harden an edge in the comparison, is the lack of help Harden had on offense. None of the 204 points he scored were set up by a teammate; he scored every one of them unassisted. Bryant was assisted nine times in his 65-point explosion against the Blazers on March 16, 2007, the game that kicked off his surge.

Harden simply did more on his own, in less time and with virtually equal efficiency. Certainly, Bryant deserves credit for amassing his totals in an era less friendly to offensive basketball. The average offensive rating in 2006-07 was 106.5. This year, it’s 110.2. Bryant’s production was more striking when compared to league norms but, man, the comparison is close.

And if you expand the scope a bit, you can really tick off the Kobe-is-king crowd:

Morey was right: There’s a conversation to be had here, so let’s continue it.

Harden has two 50-point, 10-assist games this season. Chamberlain had two in his career, Abdul-Jabbar and Jordan had one apiece, and Bryant never made it happen.

Harden is also one of two players (Wilt again) to score at least 55 points in back-to-back games.

If you just go through the numbers and pick out specific accomplishments from Harden’s remarkable run, you really can start to appreciate that he’s reached a level of productivity that rivals or exceeds anything we’ve ever seen. And the longer it goes on, the easier it’ll be to argue Harden is the best offensive player of all time in a broader sense.

That’s an enormous efficiency gap, one that distinctly sets Harden’s 2018-19 apart from any modern-era scoring season. Chamberlain had six seasons of over 35 points per game, topped by the 50.4 he averaged in 1961-62, but he never scored as efficiently as Harden did—partially because there was no three-point line and partially because he was a crummy free-throw shooter.

Plus, we just can’t talk about Chamberlain’s numbers without acknowledging he was playing in an ancient and practically unrecognizable NBA. The “can’t compare eras” argument is a copout, but there’s no denying the greatest achievements of Chamberlain’s career owe to an era that included very little defense, extreme pace and the 6’8″ chain-smoking “centers” who worked offseason jobs at lumber mills after guarding him from November to May.

And anyway, among players to average at least 35 points per game in any era, none managed more than five assists. Harden is averaging 8.3 and already holds the record for producing 50 points (via his own buckets or assists) in 20 straight games.

If we’re talking career-long status, Harden is not the best offensive player ever. If the question pertains to a single season, there’s a real debate to be had.

But if this is about the level Harden has reached over these last several weeks, if we’re taking a snapshot approach to isolate the greatest prolonged stretch of offensive basketball anyone’s ever seen, well, yeah…I can get there. And it’s not even that hard.

There’ll be backlash about this—complaints about his foul-seeking behavior, the loosened definition of traveling that unlocks his step-back triple, the distaste for the admittedly unappealing aesthetics of his game. The most vehement detractors will argue Harden is basically a product of extreme gamesmanship, subtle offensive fouls and general trickery. They’ll say he’s basically cheating.

To be fair, sometimes that’s exactly what he’s doing.

But isn’t that the true mark of greatness?

Not cheating per se, but the feeling that cheating must be taking place because the alternative is accepting the fact that someone has hacked the system. Harden has figured out a new and better way to complete the most central basketball task there is: scoring.

To invoke a tech-bro term no one should ever use unironically, isn’t this just Harden disrupting the space? Isn’t he upending norms like Chamberlain did a half-century ago, or like Stephen Curry did a half-decade ago?

Harden, today, is playing offense better than anyone ever has. And it’s not even clear whether we’ve reached an inflection point. In theory, his usage could continue to rise. His step-back volume could increase. He could go a month without being assisted.

That’s the nature of pioneering play like this; nobody knows where the edge is. Nobody’s sure how far Harden could push things.