If movies were scientifically accurate, here’s how Jaws would pan out: As the film’s signature theme begins to play, a black dorsal fin slinks around the water’s surface. Great white sharks flee in fear as the camera reveals the true menace: a killer whale. END_OF_DOCUMENT_TOKEN_TO_BE_REPLACED

The first U.S. trial of CRISPR in humans has begun, NPR reported Tuesday. Two patients are currently being treated as part of a University of Pennsylvania study. Per NPR, both have difficult-to-treat forms of cancer and both have relapsed after regular treatments. As part of the trial, researchers are taking immune cells from the patients’ own bodies and editing them with CRISPR before putting them back in. The hope is that these edited cells will be better at identifying and attacking the cancer than their unaltered counterparts. According to the U.S. government clinical trial registry, the researchers are hoping to enroll 18 people in their study. But it’s not certain yet whether they’ll be approved for that many subjects, reports Jon Fingas for Engadget. END_OF_DOCUMENT_TOKEN_TO_BE_REPLACED 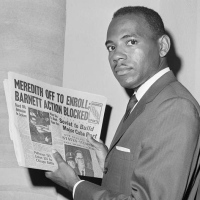