Some of the most iconic watches have no equal, and this is most certainly the case with the Astronomia by Jacob & Co. It was launched in 2014, but very quickly became one of the signature models of the brand. This is not surprising, as it proves to be the perfect canvas for the brand to let loose their boundless creativity. As a result, many different versions of the Astronomia have been launched in the years since its introduction, and Jacob & Co doesn’t show any signs of slowing down. 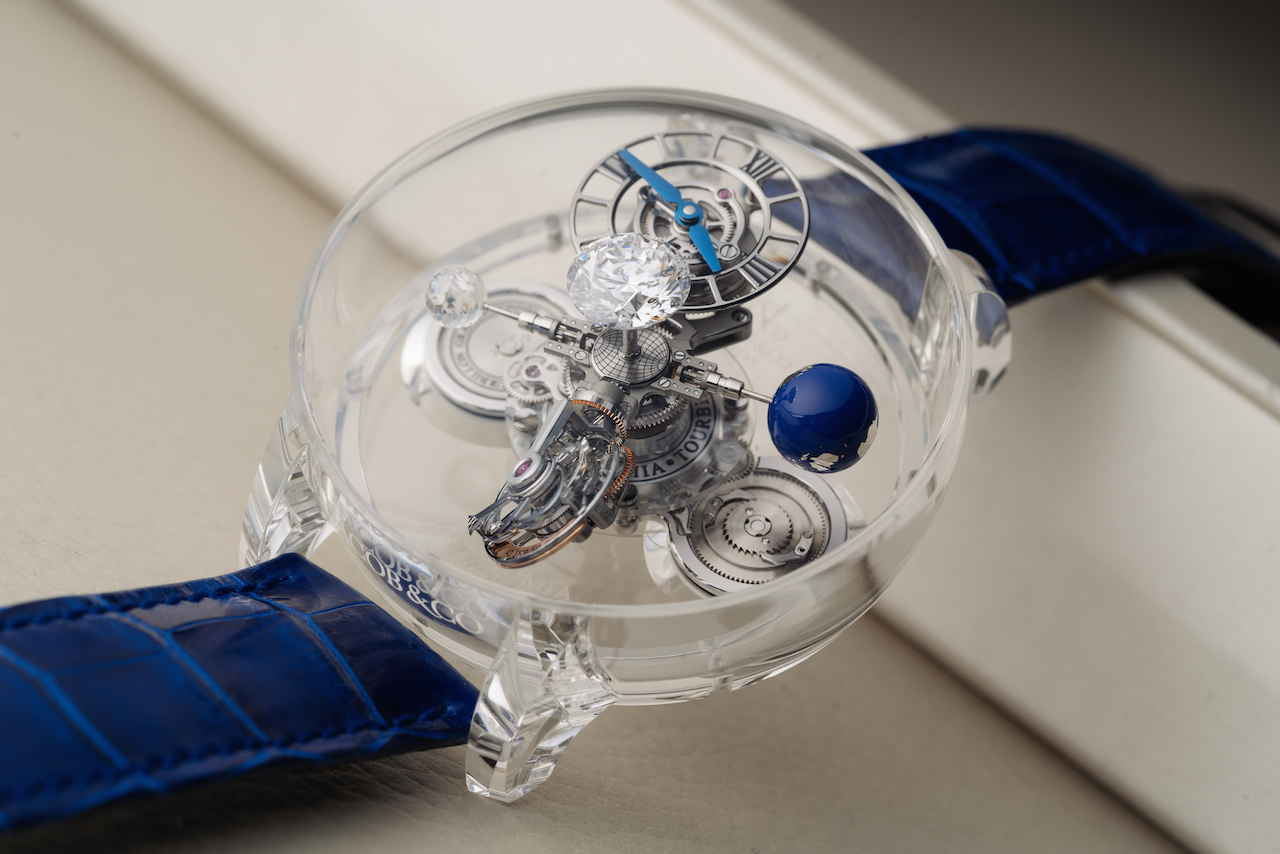 Key elements of each Astronomia are the flying tourbillon, the small dial that turns around the watch, yet where twelve o’clock remains on top thanks to a differential gear and a rotating globe. All these elements are captured in what is essentially a dome crafted from sapphire crystal elements set in a frame. The exception of this rule is the Astronomia Flawless. This watch lacks a frame, as it is crafted solely from sapphire crystal. Then it becomes clear how the movement of the watch is constructed. To create this caliber, Jacob & Co teamed up with the watch design house Studio 7h38. This is not the only watch that they created in collaboration with them, as also the movement of the SF24 is from their hand. 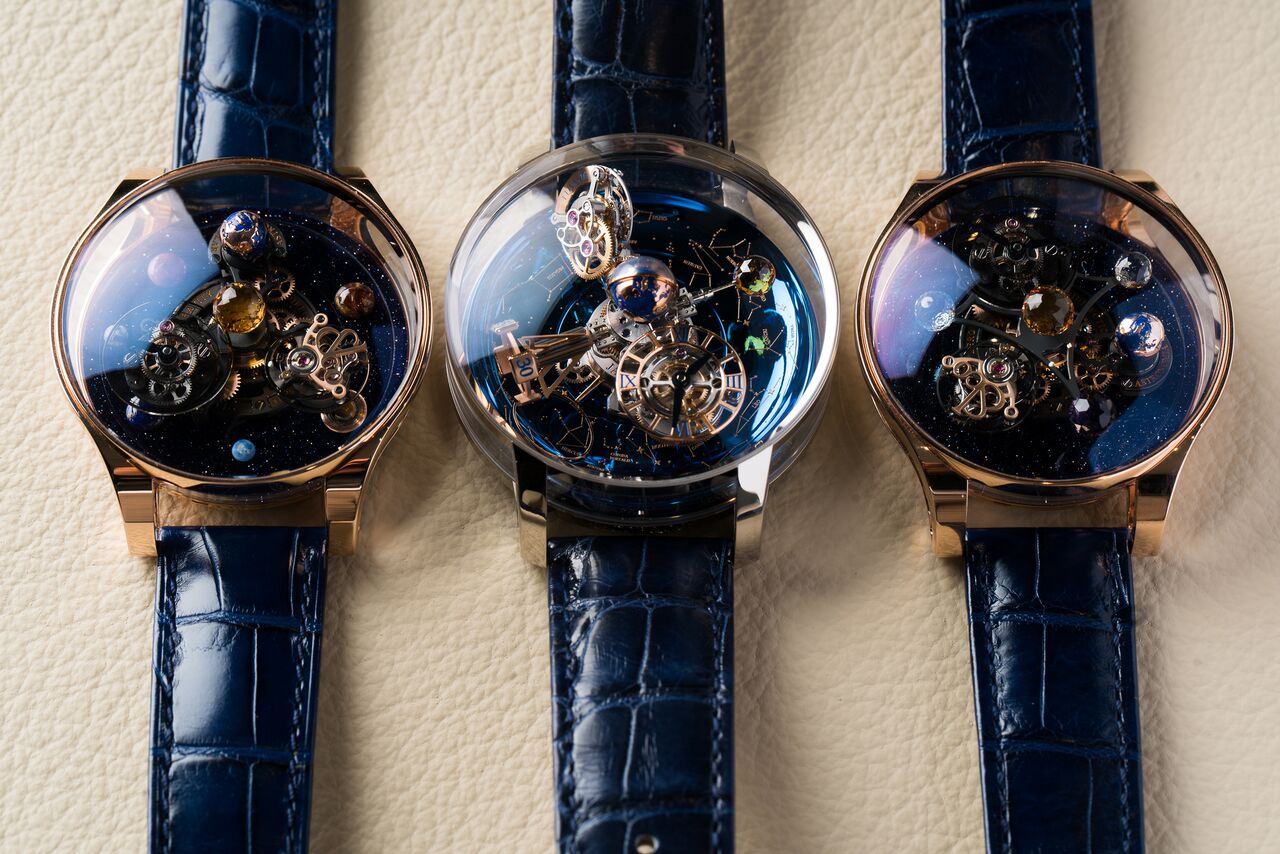 A unique feature of the Astronomia is that it lacks a crown. Instead, it has two keys at the back of the watch, with recessed hinged tabs. One is used to wind the watch, the other to set the time. While the original Astronomia was a whopping 50mm in diameter, later versions offered a smaller diameter. However, the Astronomia is not a watch that should be judged on its size, as it uses it so well, and relatively short lugs make it that even those of us with smaller wrists can still wear one with comfort. 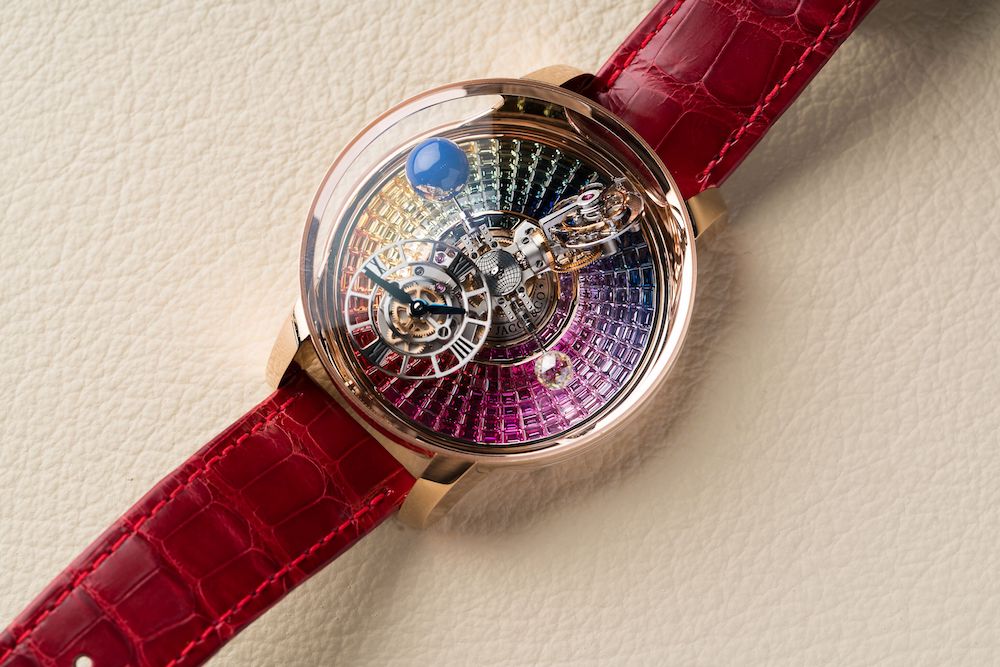 While they offer an impressive collection of watches, is Jacob & Co also a jeweler to the stars. The setup of the Astronomia gives them plenty of room to also utilize their skills in that field, and many versions set with gemstones of the watch exist. The Astronomia Rainbow, with its backdrop of baguette-cut sapphires in nearly every color known to man, is the perfect example of this. It also shows that the movement can highlight like no other the unique ‘Jacob Cut.’ This is a particular cut, developed by Jacob & Co in which a diamond is given 288 facets. By putting it on one of the axes, it is continuously moving and catching the light, showing the fire and scintillation that this cut wakes up in the diamond. 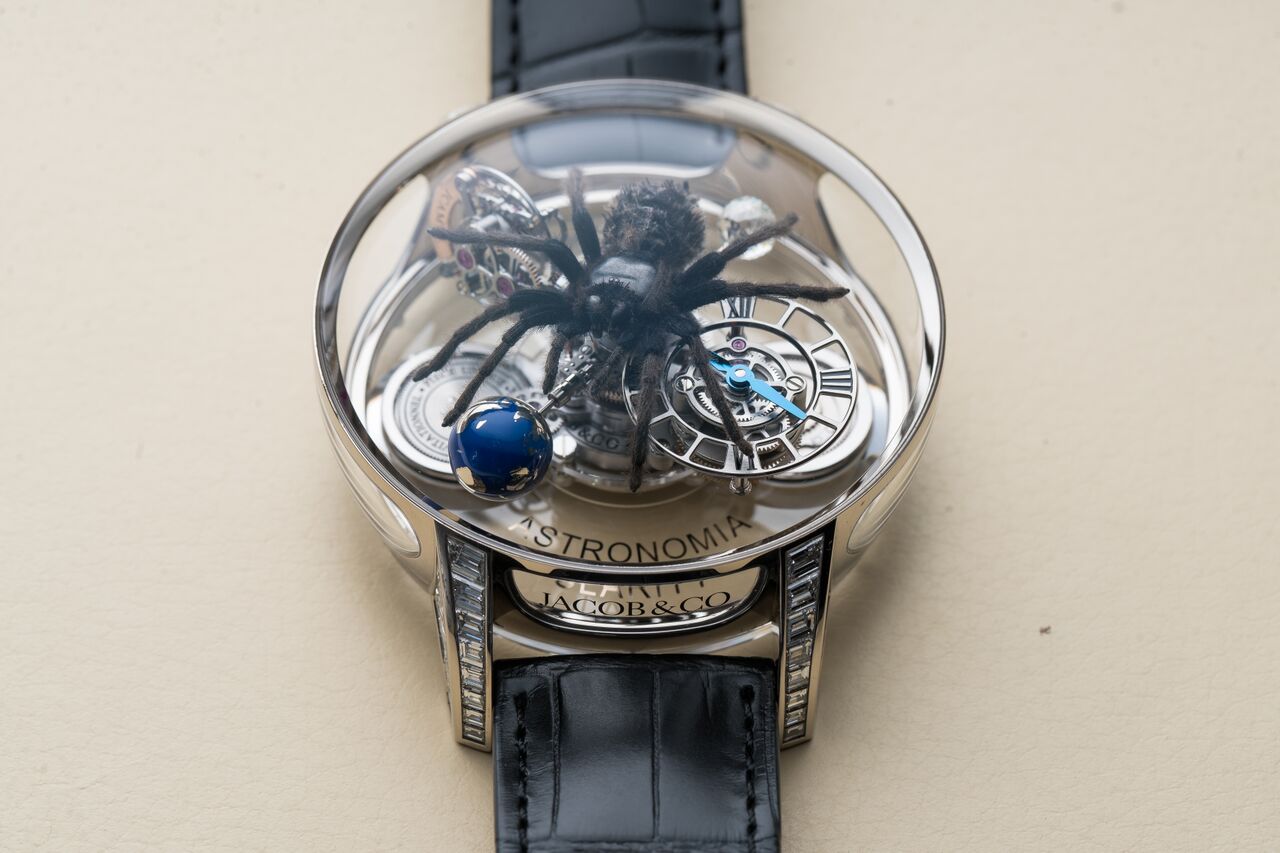 One of the things that is so great about Jacob & Co is that although they created an outstanding and sophisticated movement, they don’t take things too seriously. What of a version of this watch with in the middle a life-like spider, octopus, or mythical dragon? By cleverly utilizing the space available, they can intertwine these creatures with the movement, enabling even more possibilities with this unique watch. Yet even with these creations, every detail counts for Jacob & Co. So are the hairs on the spider meticulously made out of duck feathers for the most realistic result. With so much creativity running through the veins of Jacob & Co, we are bound to welcome more innovative versions of their Astronomia in the near future.