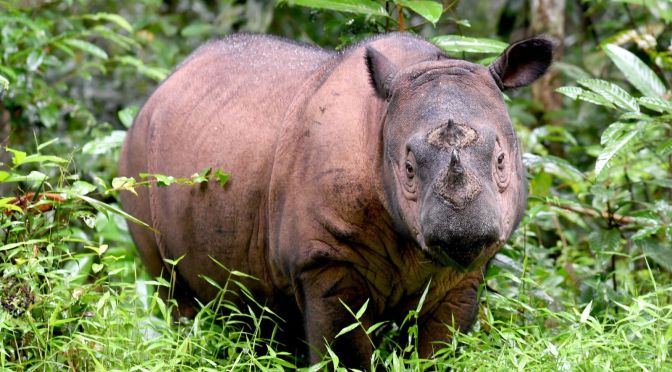 A new study finds further evidence that humans are driving the world’s sixth mass extinction. Published in the Proceedings of the National Academy of Sciences Monday, this research focuses on terrestrial vertebrates—amphibians, birds, mammals, and reptiles—and found that more than 500 species are “on the brink of extinction,” per the paper.The extinction of vertebrates isn’t just about losing beautiful creatures to admire. Each and every species plays some type of ecological function. The loss of a single one can have a cascading effect on the rest of the species within its ecosystem, effects that can impact humans as well.

“The current extinction crisis is one of the more urgent global environmental problems and the only one [that is] truly irreversible,” author Gerardo Ceballos, a researcher at the National Autonomous University of Mexico’s Institute of Ecology, told Earther in an email. “Once a species is gone, there is no way to bring it back. Our paper indicates that is vastly speeding up.”

At least 1.7 percent of terrestrial vertebrate species have fewer than 1,000 individuals left. This includes species like the Sumatran rhino and the Española giant tortoise. Most of those species are located in South America and in the tropics at-large. Birds make up the highest proportion of those impacted. That’s in line with previous research that shows birds, in particular, are suffering from the pressures of deforestation and climate change, which can throw their migratory rhythms out of synch.

“We are no longer looking at the loss of obscure species that most people aren’t interested in. We are looking at biological annihilation.”

While this data set looks at species with fewer than 1,000 individuals, the scientists found that many of these species’ numbers are much lower than that. More than half of these species are estimated to have population sizes of 250 individuals or fewer. That’s especially true among mammals and amphibians. Previous research has indicated that amphibians—including those we haven’t even discovered yet—are being lost at a staggering rate. There are 903 species of vertebrates with under 5,000 individuals left, indicating those already pushed to the edge could have more company soon.

“By focusing on the species of wildlife that humans care most about, including mammals and birds that are down to less than 1,000 individuals, these scientists point out that extinction is accelerating, and this is undermining the life-support systems humanity depends on,” Tierra Curry, a senior scientist at the Center for Biological Diversity who was not involved in this paper, told Earther in an email. “They are stating clearly that the very survival of humanity is at stake here. We are no longer looking at the loss of obscure species that most people aren’t interested in. We are looking at biological annihilation.”

Data on some wildlife species is pretty limited, which means this destruction may be a lot worse than the numbers tell. Ceballos fully expects that there are more species on the brink than those outlined in the new study. Until scientists can gather data on their population sizes, just how many are at-risk remain a mystery.

The thing is, we’re running out of time to take action to save these species. A landmark report released last year found that we could see a million species go extinct over the next few decades, all due to humans. Habitat destruction, thewildlife trade, and climate change are all putting pressure on the natural world. Today’s extinction rates are hundreds or thousands of times faster than the rates we’ve seen during previous extinction events. To put this in context, in the last 100 years, Ceballos said we’ve lost as many species as would historically have been lost over 10,000 years if humans weren’t altering the environment so radically.

That also means we’re running out of time to save ourselves. We need the natural world as intact as possible because it provides ecological services humans take for granted. Those services include filtering freshwater, protecting shores from storm surge, and pollination for crops among countless others. Until we can create sufficient measures to protect habitats and end the illegal wildlife trade that fuels this crisis, this extinction event will continue to unfurl. There will be no one to blame besides us.

“There have been five previous mass extinctions,” Ceballos told Earther. “This is the only one caused by humans. And it is very different for that. We are the cause. But our survival is at stake because of this massive loss of species.”