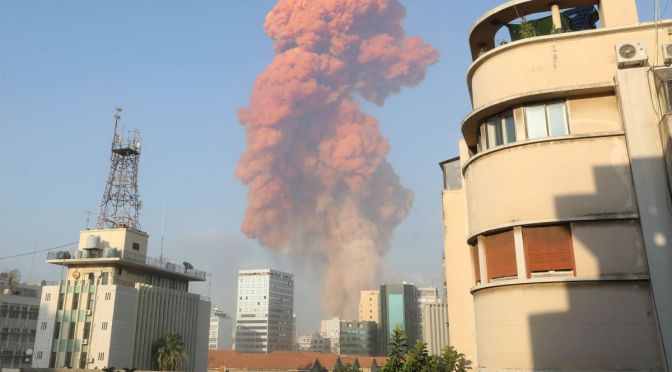 A large explosion was reported in the Lebanese capital of Beirut on Tuesday.

Early reports, including a rundown of what’s currently known about the incident via journalist Joyce Karam, said that it’s believed that the explosion—which some have reported as being two separate explosions within minutes of each other—occurred near the Beirut port. Other outlets—including BBC News—stated that word of a second blast was thus far “unconfirmed.”

First was at Port. This is closer to downtown pic.twitter.com/6DdmgQFriD

In some footage, however, you can see smoke billowing out of a structure before a blast is seen and heard, at which point the person holding the camera appears to take shelter. Several reports also noted that local media was linking the explosion to a blaze that broke out at a fireworks warehouse.

Multiple buildings, including a regional CNN bureau and the headquarters of former Prime Minister Saad Hariri, are said to have been damaged. Many people have also reportedly been injured, though preliminary information—aside from widely shared footage—was minimal. Area hospitals, already dealing with COVID-19, are now calling for blood donations.

This is the view of Gemmayzeh from a friend's place now. pic.twitter.com/KVf5k1gvFD

Later this week, a verdict in the trial in absentia centered on the killing of former Lebanon Prime Minister (and Saad Hariri’s father) Rafic Hariri is expected to be announced.