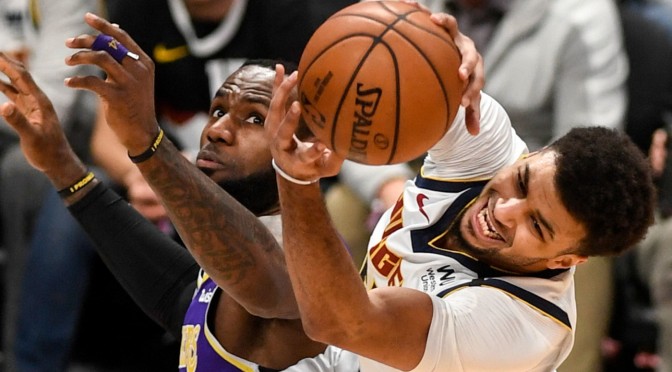 With the shot clock winding down and Nikola Jokic in a rare struggle to find a teammate, Jamal Murray scurried toward him, then away, then back to the Serbian to free himself from Paul George. All that just for Kawhi Leonard to switch onto him as he finally received the ball. But the daunting task of taking down the reigning Finals MVP and former Defensive Player of the Year did little in the way of fazing him—Murray calmly rose up and hoisted a shot going to his right and almost fading into Doc Rivers and a referee on the sidelines. It was the type of shot that fit only one description:

The final dagger in the heart of the L.A. Clippers’ title hopes was a cold-blooded 3-pointer that pushed the Denver Nuggets’ lead to 18 with just over two minutes remaining, earned a passionate “Bang!” from Mike Breen, and some choice words from Murray for a Clippers bench that could do nothing but begrudgingly accept their fate in Game 7 of the Western Conference Semifinals.

Murray has always been confident, but there’s Blue Arrow confidence and then there’s Mamba Mentality. The influence of someone who learned to not just be unflappable but go for the kill in the testiest of times is shining through this post-season. Last year in late August, after signing a five-year, $170 million extension with the Nuggets, the 23-year-old attended the late Kobe Bryant’s invite-only Mamba Sports Academy in Thousand Oaks, California. It was a camp featuring several of the game’s rising stars including De’Aaron Fox and John Collins but headlined, ironically, by Leonard and George.

“He showed me a lot of different stuff, a lot of those things were mental aspects,” Murray said about picking Bryant’s brain. “X’s and O’s we went through, and depending on sets there’s stuff we went through, and we went through some other things on the court, but a lot of it’s just confidence; confidence to get around your man, confidence to shoot over your man, and once the guy in front of you is irrelevant. Then the game starts to slow down and you start to see the passes, you start to see where guys are supposed to be, where the rotations are coming from.”

Murray has been one step ahead of the pack this entire post-season and the way in which he’s picking apart defences would leave you thinking he’s become Neo from The Matrix. Time is literally bending to his will—pulling up for three when he anticipates the defence playing him for the drive, driving when they get set to do the opposite. When the rim’s protected by bodies, he calmly arrows in the prettiest of floaters.

“As much as I’ve looked up to LeBron and had him as my idol, now it’s time to go in there and put in the work that I’m putting in all these years and put it to the test.”

Asking questions and intently listening in to the answers Bryant provided are memories he’ll never forget but putting those lessons into practice was always going to be the true measure of the value of those words. Hitting shots against the likes of Leonard and George at the Mamba camp turned out to be just a prelude for what would come in the NBA bubble.

“That kinda opened my eyes a little bit to see all the players that were there,” Murray recalled. “It wasn’t just Kobe, but all the players that were there, I really tried to take it in and learn from it. It was cool to be out there with that much talent on the court, had a lot of good scrimmages, a lot of good runs, and I took away how well I played against those guys. Now, the playoffs came and I’ve started to show it.”

Twice the Nuggets have now come back from trailing a series 3-1, the first time it’s been done by the same team in one post-season in NBA history. The Kitchener, Ontario native had a Game 7 to remember against the Clippers as his dazzling moves racked up 40 points and showed off a polished, complete package. He became the youngest player not named LeBron James to score at least that many in a Game 7, ahead of two other all-time greats in Oscar Robertson and Allen Iverson. There isn’t a name in the league that strikes fear in Murray’s eyes nor an area on the floor a defender can feel safe. His steps on the offensive end of the floor aren’t even based on the defenders in front of him but rather the ones in the periphery—beating those opponents to their spots before they realize they’re supposed to be there.

Jamal Murray is the second-youngest player in NBA postseason history to score at least 40 points in a Game 7 (age in years-days):

Part of that high level of focus and execution on the court has stemmed from the simplicity he has maintained off it. The isolated lives players are currently experiencing at the Walt Disney World Resort presents a significant mental burden but instead of getting too caught up in who or what’s not around, Murray has stayed staring at what’s in front of him in the present. He opted against having his parents—Roger and Sylvia—or younger brother Lamar join him, and has been spending his time away from the court sleeping, eating, hanging by the pool, and playing video games.

A matchup with LeBron James, Anthony Davis, and the Los Angeles Lakers is set to get underway but Murray’s not sweating, just enjoying the ride he earned. He knows this challenge will be different than the Clippers just the way the Clippers’ challenge was different from the Utah Jazz in the first round. He’s ready to embrace the moment because he already knows what it’s like to push himself against the best and put in the time to learn from it.

“It’s just the beginning, just the beginning,” Murray said. “It’s only my second playoffs and there’s so much more improvement that I know I can make myself and I can make on the team. And we just gotta keep finding that. I can’t wait for this summer to keep working on what I want to work on with my dad and my shot and getting to my spots, see my little brother. But right now, I’m in the Western Conference Finals. As much as I’ve seen LeBron or looked up to LeBron and had him as my idol, now it’s time to go in there and put in the work that I’m putting in all these years and put it to the test.

“It’s a blessing to be here. I’m glad I’m healthy, and I’m happy and be able to go against LeBron and AD in the Western Conference Finals. It’s a dream come true for me and will really test me in a lot of different ways.”