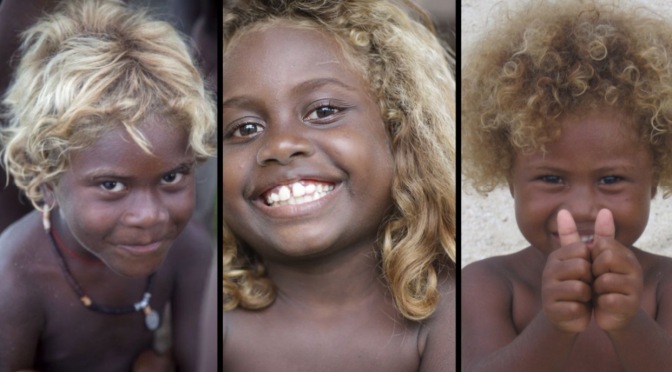 Melanesia is a sub-region of Oceania extending to the Arafura Sea, and eastward to Fiji, from the western end of the Pacific Ocean.

The name Melanesia was first used by Jules Dumont d’Urville in 1832 as a sign of an ethnic and geographical grouping of islands different from Polynesia and Micronesia.

Until recently, the indigenous Melanesian people practiced cannibalism, head-hunting, abduction and slavery, just like the Asmat tribe, but in contact with Europeans, the population is now predominantly Christian. Nevertheless, more than 90% of the population lives in rural areas.

Although the indigenous Melanesian population of the islands has the darkest skin outside of Africa, between 5% and 10% of the population has bright blond hair.

There have been several theories about how they got their blond hair — the sun and salt whitening, the high intake of fish, or the genetic heritage of mixed-breeding with the Americans / Europeans who founded them in the islands.

The Melanesians have a native TYRP1 gene which partly has blond hair and melanin and completely differs from Caucasians because it does not exist in their genes.

It is a recessive gene and more prevalent in children than in adults, as the individual matures, the hair becomes dark.