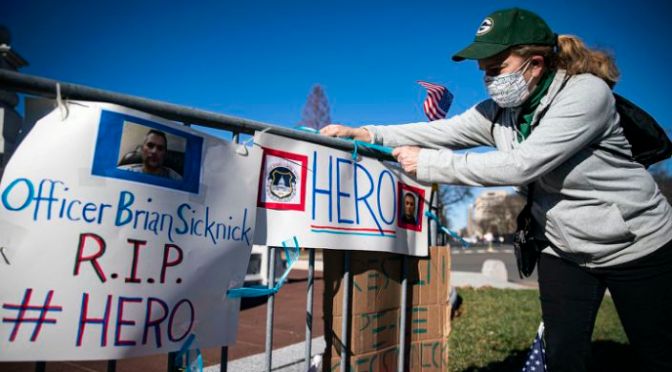 Sicknick is one of the five people who died in the violent attack against the legislative building on Jan. 6 after being injured by the mob. According to the New York Times, the FBI is investigating 37 different people in connection with Sicknick’s death.

Law enforcement officials reported that the member of the Capitol Police Department was hit with a fire extinguisher as the mass of rioters breached the halls of Congress. Sicknick later died in the hospital where he was being treated, succumbing to his injuries. The FBI memo obtained by the Times also noted that 14 additional Capitol police officers were injured by the mob.

Using photos and video taken from inside the Capitol, the FBI has been able to identify and arrest a number of violent rioters who participated in the Jan. 6 insurrection, including the so-called “QAnon Shaman,” the son of a prominent judge, and two Virginia police officers, to name a few.

Sicknick was also not the only officer struck with a fire extinguisher during the riot. Retired firefighter Robert Sanford was also arrested this week for his part in throwing a fire extinguisher that struck several officers, which was captured on video. He’s now facing three felony charges.

As we’ve learned, the violence at the Capitol building was no accident. Fueled by Donald Trump‘s false election fraud claims and fortified by dedicated organizers, reports that have followed the attack revealed the violent intent behind many of the rioters, including one retired Air Force vet who planned to take hostages.

DC Metropolitan Police Officer Michael Fanone spoke about his experience during the attack on the Capitol, recounting how someone in the mob suggested killing him while he was injured after being tased multiple times.

“Some guys started getting a hold of my gun and they were screaming out, ‘Kill him with his own gun,'” Fanone recalled, as reported by CNN.

More violent attacks are expected to occur across the country and at the U.S. Capitol in the days leading up to Joe Biden’s inauguration on Jan. 20, the FBI has warned.