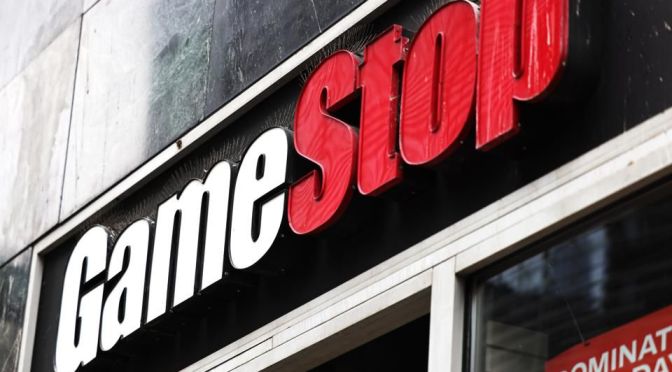 According to CNBC, GameStop’s share price went from under $20 at the beginning of the month to more than $347 by the end of Wednesday. This surge is, of course, great news for the failing video game retailer, but has caused a massive headache for hedge funds and big-time investment firms that were betting against it.

But what exactly caused the shares to skyrocket in such a short period of time? Who benefited from the surge? Who took a massive hit? And how will this frenzy potentially impact the trading world? We’ve attempted to explain all of that and more in the following breakdown.

Who Are Short-Sellers and Why Were They Drawn to GameStop?

GameStop’s financial struggles have been well-documented over the past year, as the global pandemic and the shift to online purchasing have wreaked havoc on sales. Because of this, the video game retailer had become very appealing to corporate short-sellers—investors who anticipate a stock’s decline.

Unlike long investors, short sellers do not actually buy a stock; they instead borrow shares and then sell them to another investor at higher price than what it’ll cost to purchase the stocks from the original owner, typically a brokerage company. It’s a risky move primarily based on speculation. If the shares do decline, the short-seller has the opportunity to buy the stocks back at a lower cost than the original sale price. They will then pocket the difference, thus profiting off a company’s failure. But if the shares happen to increase, the short-sellers will have to pay for the borrowed shares at higher price than what they sold for. And those losses could be limitless, as stock prices can theoretically increase forever.

There are times when a short-seller can minimize his/her losses when the stock prices begin to rise. They just have to act fast. Once they see the stocks prices aren’t dropping as anticipated, the short-sellers can cut their losses by quickly purchasing the shares back and repaying the original owner before the prices increase even more; however, in some cases—like that of GameStop’s—the increase happens so fast, short-sellers are unable to prevent a heavy loss.

So how did Reddit users band together to inflate GameStop’s stock prices? Let’s rewind to April 2020.

According to Bloomberg, Reddit user Senior_Hedgehog pointed out that 84 percent of GameStop’s stock was held in short at the time of his post, which was shared on the r/WallStreetBets forum. The user then called on his fellow investors to buy as many GameStop shares as possible, and demand their brokers not to loan their new shares to short-sellers. The post is widely credited for igniting, what many have called, the “David vs. Goliath” battle between individual investors and hedge funds.

Although the efforts to screw over big Wall Street began nearly a year ago, it wasn’t until this month when the support for GameStop ballooned on Reddit. More and more users began utilizing trading platforms like Robinhood to purchase GameStop shares and collectively inflate the company’s stock prices.

WallStreetBets also received a major boost this week, when Tesla CEO Elon Musk promoted the forum on his Twitter.

The massive rally resulted in major losses for major investment firms like Melvin Capital, which is known for its short positions in GameStop.

Was GameStop the Only Company Affected?

Reddit users behind the GameStop mania have recently turned their direction toward movie theater chain AMC and smartphone maker BlackBerry—two struggling companies that have also become popular among short-sellers.

According to Business Insider, Reddit users have spent the last several days spamming the r/wallstreetbets Discord server with calls to purchase AMC stock. The effort apparently paid off, as shares of AMC Entertainment Holdings increased by 310 percent on Wednesday.

Individual investors pulled a similar move with BlackBerry and Bed Bath & Beyond, which saw its shares up by 24 percent and 64 percent, respectively. National Beverage Corp.—the maker of LaCroix sparkling water—has also received support from the WallStreetBets community, as has the once-mighty video-rental chain Blockbuster.

These increases in stock prices further highlight how easily the stock market can be manipulated. In the case of GameStop, the company’s value had nothing to do with operational changes—it was simply a result of internet culture.

“It doesn’t make business sense,” Loup Ventures co-founder Doug Clinton told Bloomberg. “It makes sense from an investor psychology standpoint. I think there’s a tendency where there is heavy retail interest for those types of traders to think about stocks differently than institutional investors in terms of what they’re willing to pay.”

Although short-sellers reportedly took a $5 billion hit following the GameStop surge, not everyone experienced a loss. Several Redditors have claimed to have made millions off their GME investments.

User DeepFuckingValue, who has been called the “granddaddy” of the GME stock market surge, is perhaps the most notable figure in this insane situation. According to Esquire, DFV managed to turn a $53,000 investment, which he made in 2019, into more than $22 million by this beginning of this week. And he did it through call options—contracts that give investors the right to purchase shares at a fixed price on or before a certain date.

Other Redditors have also claimed to have made millions with their GameStop investments, but because the majority of users are anonymous, it’s difficult to say if their claims are legitimate.

How Are Wall Street and Government Officials Reacting?

Needless to say, Wall Street isn’t exactly thrilled with the GameStop stunt. The previously mentioned investment firm Melvin Capitol has not disclosed how much it lost on its short position; however, CNBC reports the firm has received a nearly $3 billion investment from Citadel and Point72 following the losses.

It’s clear big Wall Street was stunned by the GameStop rally, so much so that a Massachusetts regulator has called for a 30-day suspension of GME stock trading.

According to Barrons, Massachusetts Secretary of the Commonwealth William Galvin has told the New York Stock Exchange that there is “no rational basis for this run up,” and believes the situation “needs some regulatory intervention” to ensure similar occurrences never happen again.

Massachusetts Sen. Elizabeth Warren has also called on the U.S. Securities and Exchange Commission to “do their jobs,” suggesting there is a need for more regulations.

“With stocks soaring while millions are out of work and struggling to pay bills, it’s not news that the stock market doesn’t reflect our actual economy,” the former presidential candidate said in a press release. “For years, the same hedge funds, private equity firms, and wealthy investors dismayed by the GameStop trades have treated the stock market like their own personal casino while everyone else pays the price.”

There’s also some questions about whether any of this is illegal. Critics have accused WallStreetBets users of manipulating the stock market by artificially inflating stock prices. However, experts say it would be difficult to prove than any crime was committed.

“It’s an enforcement nightmare for the SEC,” James Cox, a professor at Duke University School of Law, told Bloomberg. “The question is: where does the manipulation start and when does trading on your own hunches and publicizing your hunches start?”

“If you can actually catch people knowingly passing on fraudulent information, then that is clearly illegal,” he explained. “If all they are doing is saying, ‘hey I think this company is a good buy,’ there’s not a lot anybody can do about that.”

Many have also speculated that WallStreetBets users were being silenced on Discord, a messaging platform that removed WSB’s server on Wednesday night.

“We decided to remove the server and its owner from Discord for continuing to allow hateful and discriminatory content after repeated warnings,” Discord wrote in a statement, before alleging financial fraud. “To be clear, we did not ban this server due to the financial fraud related to GameStop or other stocks …”

The WSB Reddit moderators touched on the Discord situation Wednesday night, when they posted a message explaining why the forum had gone private for nearly an hour.

“We’re suffering from success and our Discord was the first casualty. You know as well as I do that if you gather 250k people in one spot someone is going to say something that makes you look bad,” the message read in part. “That room was golden and the people that run it are awesome. We blocked all bad words with a bot, which should be enough, but apparently if someone can say a bad word with weird unicode icelandic characters and someone can screenshot it you don’t get to hang out with your friends anymore. Discord did us dirty and I am not impressed with them destroying our community instead of stepping in with the wrench we may have needed to fix things, especially after we got over 1,000 server boosts. That is pretty unethical.”