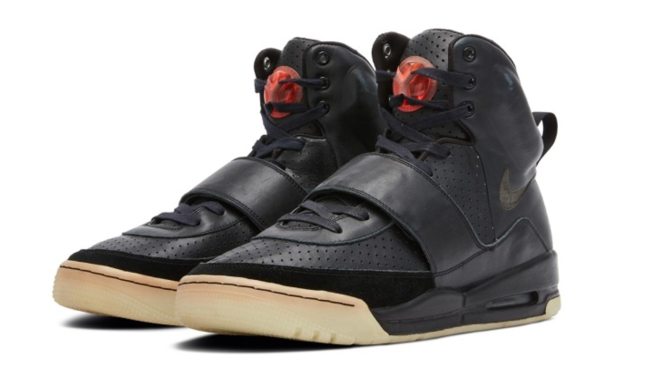 Sotheby’s auction house is selling the pre-production Yeezys as a direct purchase with an estimated value of $1 million-plus. Their sale should easily best MJ’s signed Air Jordan 1’s, which fetched $560,000 after a bidding war at a Sotheby’s auction in 2020.

After more than a year of rumors regarding a West-designed sneaker, the rapper, fashion designer and entrepreneur publicly debuted the remarkable kicks at the 50th Annual Grammy Awards in 2008 during his live “Hey Mama”/”Stronger” medley.

He won four awards, but eagle-eyed hypebeasts and sneakerheads were focused solely on the shoes as they frantically—and unsuccessfully—attempted to identify the silhouette on social media.

West and footwear guru Mark Smith created the sample at Nike HQ’s “Innovation Kitchen” lab in Beaverton, Oregon. The upper is comprised of soft black leather with perforated detailing, and the heel overlay is branded with a tonal Swoosh.

While Adidas currently makes West’s sneakers, the Nike Air Yeezy I and II are considered are considered foundational to the Yeezy brand’s trajectory.

Applied Art founder Ryan Chang, who is devoted to curating and collecting sneakers as fine art, said, “I’ve always considered sneakers to be design objects – a physical confluence of artistry, history, and in this case, music.”

“The Air Yeezy Prototype is particularly special to me because it captured the cultural moment in 2008 so perfectly. There he was, Kanye West, on stage at the Grammys, winning four awards just that evening, and unveiling an incredibly important and iconic design in Nike’s storied history.”

Visit Sotheby’s website to learn more or submit an offer for consideration.