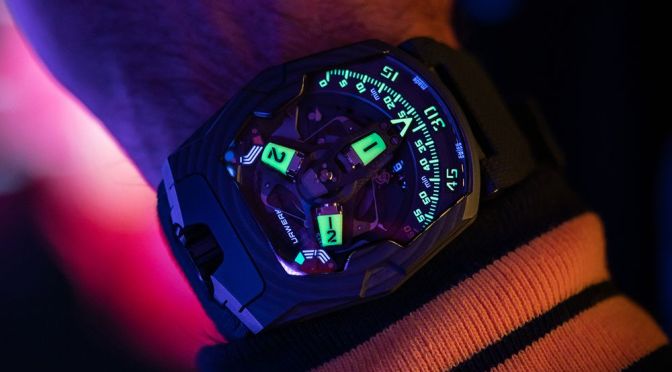 For URWERK’s third take on its UR-220 model, co-founder Martin Frei has tweaked a number of materials, colors and finishes, using the black-coated movement and Carbon Thin Ply case as a backdrop to showcase the watch’s impressive new light-show.

While UR-220 satellites usually feature crisp edges refined by CNC machines, those for the new Asimov model are cast using Super-LumiNova’s X1 BL lume in silicon moulds, resulting in a hardness similar to ceramic, before being hand-finished and hour numerals added with lacquer.

URWERK’s digital Oil Change complication is also present on the reverse and activated by removing a protective pin, which sets in motion a counter displaying the number of months the watch has been running, allowing the owner to keep track of the brand’s recommended 39-month service interval.