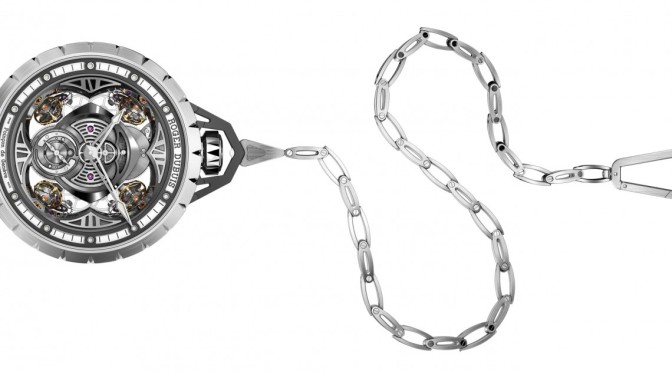 The Quatuor is the most ambitious yet singularly least understood high-watchmaking project ever undertaken by Roger Dubuis. Replace “Roger Dubuis” with “any Swiss watch brand” and you could still make a solid case for the truth of that statement.

The Quatuor was first introduced to us in late 2012 and officially at the 2013 Salon International de la Haute Horlogerie (SIHH), a technical behemoth of Excaliburean stature. In principle, it’s not that complicated to grasp. Four reciprocally inclined balances (not tourbillons,please — you’re hereby entitled to give anyone who calls the Quatuor a tourbillon a strong stare of disbelief and a half-hour explanation of what it really is) are linked by a series of differentials to give one single unified reading of the time.

That’s the “what”; so far so good. The “why” is pretty straightforward too, though the “how” is kinda complex, but that’s fine, you’ve got plenty of time, haven’t you?

The five differentials that the Quatuor is armed with are pretty incredible, but only three of them have any direct relevance to the system of linked balances. (The other two belong to the winding system and the power reserve indication.)

When I say five o’clock and seven o’clock and all that, you have to take that as an approximation — strictly speaking they’re positioned at four-thirty and seven-thirty and so on. Basically they’re set equidistant around the dial at a 45° offset from the horizontal and vertical axes. We cool? Cool.

Now, because each pair of diametrically opposed balances are set on perpendicular planes to each other, theoretically the error caused by one balance being in a certain position is cancelled out by the other balance oscillating at right angles to the first one. There are a lot of qualifying statements to append to the sentence I just wrote. The balances must be perfectly paired and identical in pretty much every way — but you guys understood that already, because you’re all super smart, that’s why you’re curious about this watch.

Okay, here’s the other important thing about the Quatuor. It exhibits no signs of mechanical resonance. The balances are set as far apart as they can be, spatially, and the bridges and plates are engineered to disrupt any transmission of phase-locking impulses. This is extremely important, because the whole point of the watch is to have four discrete readings of the time that can be averaged into a single, statistically super accurate indication. This wouldn’t happen if the balances were all locked in harmonic resonance.

I’ve often felt that there should be a drinking game based around how many times people mention the words “tourbillon” and “resonance” when discussing the Quatuor. You could so totally own this game and everyone playing it. Unless the people playing it have also read this article, I mean.

For those among you who absolutely have to get to the very depths of this timepiece, you should try reading my insomnia-curing 2013 technical breakdown and Jack Forster’s considerably less snore-inducing review.

Why the hell not?

Roger Dubuis have pushed out the Quatuor again this year, but this time they’ve done it as a pocket watch in the guise of the Excalibur Spider, with its excellently skeletonised titanium case. They’ve called it the Excalibur Spider Pocket Time Instrument, because it is still a behemoth, and it deserves to be pulled out and consulted like a master of time.

Now I know that there are plenty more Roger Dubuis timepieces that are more conventionally understood to be complicated and ultra-technical, but do you now see why I said the Quatuor was simultaneously the most ambitious and least understood watch that they’ve ever done?