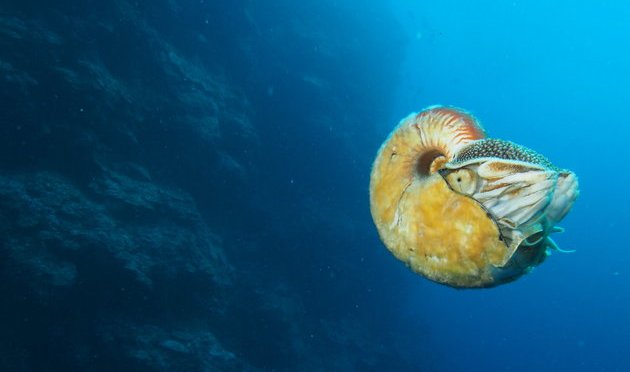 Truly a mystery of the deep, this living fossil hasn’t been seen by scientists in more than three decades. Until now.

Peter Ward, a biologist at the University of Washington, first spotted the Allonautilus scrobiculatus in 1984 alongside his colleague Bruce Saunders. The hairy animal looked fairly similar to the better known Nautilus pompilius, but proved to be an entirely new, and elusive, genus of nautilus. But the creature vanished, and Ward didn’t spot another for more than 30 years.

But earlier this month, Ward ventured to Papua New Guinea to hunt for the cephalopod again. Aside from the creature’s evasiveness, the scientist said, the schematics of the research were complicated: long days, the threat of malaria and temperatures “so hot it was almost impossible to think.”

Ward’s crew had to jump between several locations where locals were certain Allonautiluswould be found, but his team kept turning up empty-handed. They’d set up a “bait on a stick” system every night, hoping to attract the nautiluses, which live some 500 to 1,300 feet below the surface.

Until finally, there it was, swimming alongside a cousin in all its slimy glory.

The find is a substantial addition in the field of biological diversity. Nautilus pompilius, the enigmatic red and white nautilus seen above, is one of the oldest species around, often classified as a “living fossil.” But its furry cousin has a substantially different anatomy, and Ward said the genus is probably a million years old or less.

“This is kind of like a holy grail, at least in what I do,” Ward told The Huffington Post. “It takes a lot of push to put anything in a wholly new and different genus … [and] this is one of the newest animals on the planet.”

Sadly, their elusiveness is tied to growing threats also linked to the collapse of various fisheries around the globe. Nautiluses are highly sought for their striking shells, and overfishing has slashed populations.

Ward said researchers are preparing to propose the U.S. Fish and Wildlife Service add it to the the list of protected species guarded by the Convention on International Trade in Endangered Species of Wild Fauna and Flora. International protection could very well help ensure the Allonautilus doesn’t fade into obscurity once again.

“This could be the rarest animal in the world,” Ward told UW Today. “We need to know ifAllonautilus is anywhere else, and we won’t know until we go out there and look.”