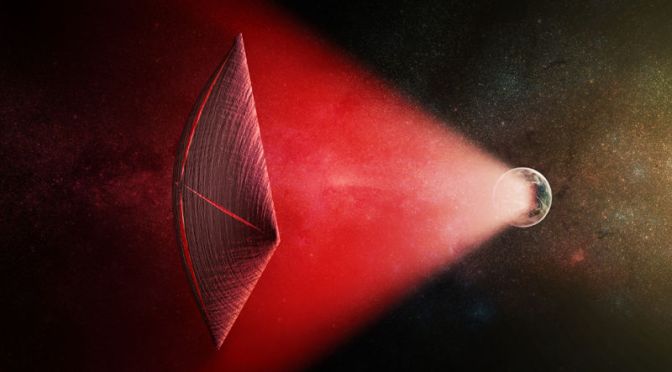 Since their discovery ten years ago, fast radio bursts have confounded astronomers. These intergalactic pulses of radio energy have defied explanation, but a new theory suggests a technological origin, whereby aliens use these beams to propel their ships through space. Extremely speculative stuff, to be sure, but it’s an idea worth pursuing given just how weird these pulses are.

The idea that Fast Radio Bursts are produced by advanced alien civilizations in order to drive spacecraft through interstellar space sounds like something a UFO conspiracy site might cook up—but it’s actually the serious suggestion of a new paper published by Avi Loeb and Manasvi Lingam from the Harvard-Smithsonian Center for Astrophysics. Of course, much more evidence is needed before we can attribute this unexplained phenomenon to artificial sources versus a natural astrophysical process.

Fast Radio Bursts (FRBs) were first detected in 2007 at the Parkes radio dish in Australia. To date, only 17 episodes of these millisecond-long flashes of radio energy have ever been recorded by astronomers. The cause of this enigma isn’t known, but scientists have implicated various cosmological phenomena, including supermassive neutron stars, gamma-ray bursts, and stellar flares. Astronomers are fairly certain FRBs are coming from well beyond our galaxy, travelling billions of light years to reach our telescopes.

With no good theory to go by, Loeb and Lingam wondered if extraterrestrials might be involved—and not without good reason. In a word, FRBs are weird. Like really weird.

“This means that a hot surface would need to have that temperature in order to radiate at the observed level,” Loeb told Gizmodo. “There is no known astronomical object that generates radio bursts at such a high brightness, which is tens of billions of times brighter than the known population of pulsars, for example.”

Another puzzling aspect of FRBs is that they repeat, but not in any kind of predictable way. The researchers say this is contrary to what might be expected from a cataclysmic event like the collapse of a star, which could energize an explosion with a high brightness temperature. Also, the observed spectrum of the FRBs appear to be concentrated around a particular frequency, and not what would be expected from something like a pulsar.

“These clues are consistent with an artificial origin,” Loeb said.

For their study, the researchers considered the possibility that these long-range pulses might be coming from a powerful alien transmitting device. To that end, Loeb and Lingam explored the technological feasibility of building such a device, while also considering its potential use. They found that, if the device were solar-powered, the sunlight falling on an area about twice the size of Earth would be sufficient to generate the observed energy. This surface area could come in the form of a large terrestrial planet, or a massive spaced-based solar collecting megastructure, such as a Dyson sphere.

To prevent the system from melting under the tremendous temperatures involved, a massive water-based cooling system could be put into place. A transmitter like this is well beyond our current technological know-how, but the authors say it adheres to the known laws of physics, so at least that’s something.

As to why an extraterrestrial civilization would bother with such a device, the researchers say it could be used as an interstellar—or even an intergalactic—signaling system, alerting other intelligent lifeforms to their presence. Or more likely, the transmitter could be used to drive probes or ships on long journeys through interstellar space.

“We envision a beamer that emits the radio waves as a method of launching a light sail,” says Loeb. “In the same way that a sailboat is pushed by wind, a lightsail is pushed by light and can reach up to the speed of light.”

To power the light sail, the transmitter would have to focus its beam on the device long enough to generate the required propulsion. The amount of power involved would be enough to drive a payload of a million tons, roughly the weight of 20 large cruise ships. As study co-author Manasvi Lingam pointed out, “That’s big enough to carry living passengers across interstellar or even intergalactic distances.”

Interestingly enough, our civilization is contemplating the use of light sails for interstellar travel—on a much smaller scale. Stephen Hawking and Russian billionaire Yuri Milner think it’s a great idea, which is why they launched the $100 million Breakthrough Starshot project in 2016. And earlier this year, a research team from the Max Planck Institute explored the possibility of using a light sail-based system to explore the Alpha Centauri system—the closest star system to Earth.

As to why we see the FRB flashes here on Earth, that’s just leakage from the alien propulsion system. “The radio beam sweeps across the sky like a radar, because the source is changing its orientation relative to us,” explains Loeb. “This could be due to the spin of the host planet or the motion of the host star or galaxy.” Every once in a while, this beam just happens to point directly at Earth, confusing our astronomers in the process. The new study has been accepted for publication in the Astrophysical Journal Letters.

“The history of science shows that it would be unwise to rule out possibilities just based on prejudice. This often leads to stagnation rather than progress.”

Assuming of course, that, the researchers are correct about the artificial nature of FRBs. More work clearly needs to be done, and more evidence gathered, but as Berkeley SETI Research Director Andrew Siemion explained to Gizmodo, FRBs are unlike like anything we’ve ever see before, and they’re forcing scientists to consider many different options. Siemion, who wasn’t involved in the study, lauds the Harvard astronomers for their work, even if it is a bit unconventional in its approach.

“We cannot…exclude the possibility that anomalous signals like fast radio bursts are produced by an advanced extraterrestrial technology, and even though it is undoubtedly an unlikely possibility, it must remain a possibility until we can rule it out,” said Siemion. “The Lingam and Loeb paper presents an intriguing idea for a specific technology beyond traditional communication or radar systems that might produce intermittent radio bursts: directed energy propulsion systems. Although admittedly speculative, this is a wonderful example of the thoughtful and open-minded approach we must bring to all aspects of astronomy when searching for potential signals from extraterrestrial intelligence.”

Siemion’s comments notwithstanding, the new theory represents one possibility among many, so we need to be careful about jumping to conclusions. As evidenced by the recent excitement over a potential megastructure around a strange star called KIC 8462852, there’s a tendency, both among the public and the media, to gravitate towards theories involving aliens rather than something mundane like natural causes.

Loeb admits that his theory is a bit out there, but he says we can’t just dismiss his theory just because it sounds weird.

“The exciting aspect of doing science is that one rules out possibilities with better data,” he says. “The history of science shows that it would be unwise to rule out possibilities just based on prejudice. This often leads to stagnation rather than progress. Having worked out a set of parameters for the artificial origin of fast radio burst, I would have no problem accepting a different explanation, as soon as it is validated by future data. Science is a learning experience; we figure out the way nature by culling down possible explanations through observations and not prejudice.” 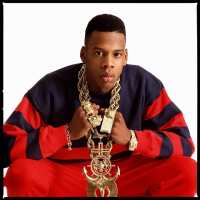